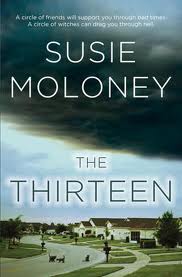 Paula Wittmore's mother falls ill after the death of a friend in the close knit community of Haven Woods.  Another friend, Izzy, notifies the young woman and suggests that she and her daughter, Rowan, return to visit.  But a special sisterhood there needs both Paula and Rowan in order to regain their number.  And be their sacrifice.

This is my kind of horror novel, where you're given hints of what's really going on and your imagination is left to fill in the blanks.  Rather than dealing in depth with all of the sisterhood, Moloney focuses on a few - keeping the novel tight and encouraging sympathy in surprising ways.  Paula and Rowan are immediately sympathetic (if not immediately likable), but I hadn't expected to like Marla, Paula's childhood friend who's trapped in a life that's becoming ever more distant from the perfect life she was promised when she joined the sisterhood.

And while I'm definitely a cat lover, this book managed to show the darker side of the animals, making me cheer for the dogs in the book (and I don't generally like dogs).

The only thing I wasn't keen on was the amount of swearing.  The characters cuss easily and often.

The climax is suitably long and dark, given the lead up, but not gratuitous or overbearing.  In other words, if you like psychological horror, this is a good book.
Email ThisBlogThis!Share to TwitterShare to FacebookShare to Pinterest
Posted by Jessica Strider at 12:28