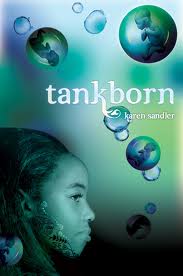 Cons: the romances seem to happen fast and are, given the environment, a little unrealistic

For Parents: no sex, no language, minimal violence


Kayla is a GEN, a Genetically Engineered Non-human. Her right cheek is tattooed with her DNA mark, where anyone can use a datapad to access her annexed brain and where the details of her job will be stored when she's given her work assignment. That assignment will be based on the skill set her gene-spliced animal DNA gives her (enhanced upper body strength) on her fast-approaching 15th birthday. She'll be taken from her nurture mother and friends and spend the rest of her life working for true and lowborns. All according to the Infinite's will. Her best friend, Mishalla, has already been assigned to a sector far away. But unknown to Kayla, Mishalla's been diverted from her assigned place to work at a crisis creche closer to home. There, Mishalla befriends a lowborn and slowly becomes aware that there's something strange about the creche as children appear and are taken away at an alarming rate. When Kayla is finally placed, she stumbles across a conspiracy that could help her people, or get her brain reset.

Karen Sandler's Tankborn is a thought-provoking YA science fiction that's very fast-paced and brilliantly executed. You're thrown into the world, having to figure out terminology via its usage rather than through information dumps. And while the plot isn't hard to follow, there's a lot of underlying themes that lend themselves to discussion (with regards to using religion to control people, the morality of creating a race of genetically engineered slaves, etc.).

One of the most fascinating aspects of the novel is the caste system. The story takes place on Loka, a planet colonized by humans. Where you fall in the hierarchy is determined by what job your ancestors had on the colony ships -- trueborns being subdivided depending on their wealth and lowborns being those who agreed to work for their passage. The interesting thing is that skin colour is generally a means of telling people of different statuses apart, with high-status trueborns being mostly dark skinned with black hair. People with lesser statuses have either really dark or paler skin. Even GENs vary in skin tone across the spectrum. This setup allows for discussions of racism without it becoming a strictly 'white' vs 'black' issue. In other words, Sandler presents it as a complex issue without simple answers.

Tankborn has romance but no sex, and the violence is kept to a minimum. The romances are fun, even if Kayla's seems a little fast given her and her beau are from completely different castes. I suspect that his great-grandfather's influence notwithstanding, a trueborn would require more time to get used to the idea that GENs should be treated with respect and are equal to humans after a lifetime of being told otherwise. The characters are interesting and their problems/concerns realistic given their circumstances.

Tankborn is a highly recommended, thought-provoking YA novel from a new imprint dedicated to diversity.
Email ThisBlogThis!Share to TwitterShare to FacebookShare to Pinterest
Posted by Jessica Strider at 12:35