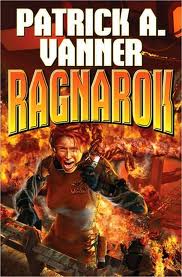 
Ragnarok is a ‘what if’ story. There are a several stories in books, TV series, and even movies that have to deal with humanity and/or civilized human cultures being destroyed or pushed back by an encroaching enemy. A majority of these stories deal with this premise by having the protagonist fighting back to reestablish civilization or find a new home for civilization. But, what if the heroes of the story realized that the reestablishment of civilization is beyond their ability, but instead, decide to clear the way for someone else? Ragnarok is the expansion of that idea. One ship, one crew, willing to sacrifice everything to eradicate an alien menace by any means necessary, to include genocide, in the hopes that humanity will be able to rebuild itself with the threat of alien aggression severely stunted or outright removed.
> There are several series about female army commanders/ship captains (David Weber's Honor Harrington, Elizabeth Moon's Heris Serrano, etc.), what made you write about a female Marine, ie a 'grunt'?


I am fascinated by other male author’s portrayal of female military members, whether it is in a novel, TV, movie, or game. Both of my parents were Marines, I was a Marine, several of my relatives were Marines, multiple friends of my family were members of all branches of the military, just as many of my own friends and comrades were; in fact the best commanding officer I ever had the privilege to serve under was female. Having spent my entire life around military members, of both genders, I have witnessed the differences in the way the genders approach situations. I wanted to see if I could capture those differences and bring them to life in the pages of my book and portray believable characters of both genders.
> What made you want to be a writer?
I have these characters living in my head, in multiple universes, all with their own lives, experiences, and stories to share. Sometimes, their adventures go in directions I would never expect, but I go with it anyway, it is their story, not mine, and I think those stories need to be shared.
> If you could, would you change places with any of your characters?


Right now, I would trade places with Tracy Clark, the recon marine. I feel more of a kinship with her than I do with most of my other characters, and her personality and zest for life just seems to be so infectious. I can’t but help and be jealous of her sometimes.
> What was the first novel (published or unpublished) that you wrote and how long did it take to write it?


Ragnarok was my first novel, and as to how long it took to write it is hard to say. I originally came up with the concept for it while I was still in the Marine Corps, back in 1998. I played with and poked the idea for quite some time, coming back to visit it over many years. I actually put pen to paper as it were, back in 2005. I played around with the first part of the story for most of a year, but then Alex would not be ignored any longer. In 2006, I pushed out the last 65,000 words in less than three weeks, and began the long process of editing and back and forth with my publisher. There were several life altering events between many of the people involved in the process, so the actual time line was much longer than was anticipated, but I am happy everything worked out in the end.
> What was the hardest scene for you to write?


The scenes between the chief of naval operations and the secretary of war. I had never been privy to those levels of interactions as a lowly (rank), and I had to do a lot of reading and research to even get an idea of how a meeting like that would go.  It wasn't as strong a scene as I would have liked, but I've gained some more experience and insight since Ragnarok so I hope to do better in the future.
> If you still have one, what’s your day job?


My wife hasn't let me become a full-time starving artist yet, so I still slave away to The Man working as as middle management in the telecommunications field. 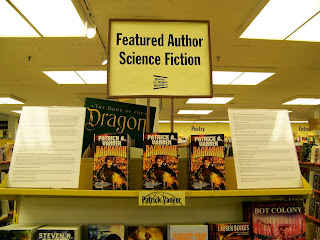 
I majored in Aerospace and Electrical engineering at Penn State, and when I separated from the Marine Corps, I went back to school to get a degree in Network Administration and Telecommunications. It helps less from the “style” side of things, but more from the “technical” side of things. It allows me to come up with some plausible technological ideas, as well as follow the logic in situations that otherwise might be missed.
> When and where do you write?


I don’t really have a “when and where” to my writing. I tend to write on my lap top, but I do it all over the house. As for the when, that is a bit more complicated. Real life obligations can make it hard to be productive without distractions, but it only takes a short period of quiet in my life to let the words flow. I wrote the short story, “The Question”, for the Citizens anthology in just a few hours. Work and life are coming up on an even keel now, so I am hoping for good things in the near future.
> What’s the best/worst thing about writing?


Best: Someone telling me that they are looking forward to what happens next.
Worst: The world conspiring to make things too crazy for me to be able to tell people what comes next.
> What is something you didn’t know about the publishing industry before you had your first book published?


I knew a fair bit about the publishing world going in to this, not because I did inordinate amounts of research, but because several of my friends are authors and publishers. I was fortunate enough to have the opportunity to pick their brains over the course of several years.  What I've learned since having the book published, has really been on a more personal level in how I deal with critiques, and praise, and moving more into the spot light at events instead of just being there to support others.
> Do you have any advice for hopeful authors?


Write something. Everyone has stories to tell, just instead of sitting around with your friends talking about it, put it on paper.Then have someone who will give you honest feedback read it. Don’t kill yourself trying to write a bestseller the first time out, just tell a tale that someone will want to know the ending of. Writing, like anything else in life, will improve with time, effort, and practice
> Any tips against writers block?


I can't think of anything to write for this.  But seriously, It is hard for me to tell the difference between writers block or just not having the energy or creativity to write anything due to outside factors and stressors.  I will tell you that getting the newest video game when it comes out and spending weeks playing it does not help.
> How do you discipline yourself to write?


For me, it is less a matter of disciplining myself to write, as it is disciplining myself to stop. When I am writing, it is not uncommon to see the sun coming up and wonder where the time went, and if I can call off work that day. I will say that I have tried to force myself to stick to a schedule of writing for set times each day, and for me that does not work.  Writing is storytelling, and when I try to force it, it becomes a chore.  I believe that telling a story should never be a chore, but fun.
> How many rejection letters did you get for your first novel or story?


Ragnarok is my first book, and Baen was my first choice in publisher. I am immensely happy that the good folks at Baen took the risk on a new author. With a little luck and a lot of guidance from their wonderful editing staff, I hope to keep my rejection letter count at zero.
Email ThisBlogThis!Share to TwitterShare to FacebookShare to Pinterest
Posted by Jessica Strider at 10:55

I take it that since its been 5 years and theres no reply from the Author on any of the pages there will be no new books. It would be nice of him to at least give closure to this, it would be the proper thing to do.

Sorry, I've got no information for you. I've had no contact with the author outside of this interview.