Path of the Sun - Book Review 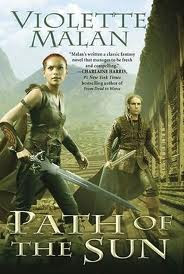 Cons: not a standalone, slow moving at times

Path of the Sun has Dhulyn and Parno, Mercenary Brother partners, involved in a murder mystery in the Menoin Tarkinate.

They come escorting the Tarkin's bride-to-be, but a grisly murder causes them to pass through a Caid ruin, the Path of the Sun, in pursuit of the killer. The path leads to another world where those Marked with the powers of Healing, Finding, Mending and Seeing - like Dhulyn - are broken and put to death. And the Espadryni, Dhulyn's extinct people, still live.

The identity of the killer is revealed to the reader early on. The makes for an interesting character study, as we see the killer interact with several people, lying and manipulating his way to his goals.

As with her other books, Path of the Sun examines a new corner of her fantasy world. The peoples are all distinct, with cultures, tastes, politics, etc. that differ from those used in the past.

Newcomers to the series will not be able to start here, however. Too much of this book depends on knowledge of events in earlier books. Characters from book 1 reappear, the trouble the partners get into in book 2 is finally resolved, and some actions from book 3 are referred to.

Still, if you haven't discovered her and want to read a quieter, more thought provoking fantasy, Malan is a great choice. Her characters grow with each novel and there's always more of the world to discover.
Email ThisBlogThis!Share to TwitterShare to FacebookShare to Pinterest
Posted by Jessica Strider at 11:57