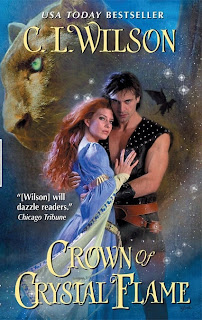 ***Spoiler Warning*** This is book 5 in a 5 book series, therefore even the synopsis will have some spoilers if you haven't read the previous books.

Pros: great wrap up for the series, satisfying battle scenes, down time between fight scenes allowed for continued character development

Cons: while Wilson was willing to kill off a few characters, there were too many last minute saves, which reduced overall tension

The Eld have begun their attack on Celaria. King Dorian and his wife are more at odds than ever and Rain, banished from the Fading Lands, is nearing bond madness.

This book starts directly after the events of Queen of Song and Souls. There is a brief recap of that book's conclusion, but you might want to skim it again before starting this book.

With war imminent, there's less time for romance. Wilson manages to squeeze in a few love scenes, but they're not as detailed as the ones in previous books. Crown is more focused on battles and Wilson does a great job of narrating battlefields.

In this book we learn more of the Elves and see some creepy creatures of evil that Vadim Maur has prepared for this war.

There's a long denouement after the climax which clears up a lot of things. Rather than feeling overlong, it makes for a satisfying conclusion.

While it seemed like she was willing to kill characters, too many named supporting characters are saved in the nick of time. Similarly, Rain and Ellysetta are almost captured and/or killed so often some of the tension was lost (as you know they'll be saved). Having said that, Wilson definitely puts her protagonists through the wringer.

If you've enjoyed the series thus far, you'll find this a satisfying conclusion.

Email ThisBlogThis!Share to TwitterShare to FacebookShare to Pinterest
Posted by Jessica Strider at 12:20