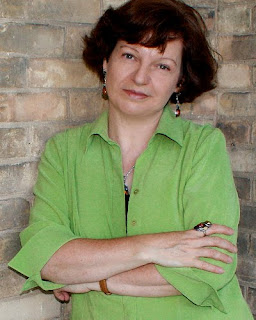 Claire Delacroix and Claire Cross are both pseudonyms of Deborah Cooke, who has been writing romance novels for many years, and has too many titles to list. So I'll just put her Prometheus Project books, the ones she talks about in the interview, down.

> What's the premise behind the Prometheus Project trilogy?

The series is set in the year 2099, in a post-nuclear world much more gritty than our own. The idea is that it's very nearly the end of the world and that the angels are making a last ditch effort to save us from ourselves. To do this, some of them voluntarily shed their wings and become mortal, mingling in the human world to take on a mission. This isn't without complications though - it's a big change for the angels to assume the limitations of mortality and our world isn't always the way they expect it to be. And in this post-nuclear society, those humans who have been damaged by radiation poisoning are enslaved as mutants - so the former angels, with their inexplicable diagonal scars, are always in danger of being "harvested".

The reason that the angels feel a sense of responsibility to us doesn't become clear until the end of Rebel, book #3, so let's not have a spoiler just yet.

> What can readers expect from the 3rd book, Rebel?

This trilogy ended up having a number of plot threads that continued from book to book. In Rebel, all of those plot threads are resolved in a big finish. I think readers of the series will find it a satisfying conclusion.

> What's it like having a pseudonym and how do you find time to write books as several people?

Pseudonyms are a pretty common tool for publishing. They're used by publishers to brand different kinds of work by the same author, not to fool readers but to let readers know what to expect from a given book. There are authors who write romance with fantasy elements under one name, for example, and mystery with romantic elements under another. Those books might even appear in different sections of the bookstore, which is a marketing strategy used for genre fiction. The assumption is that not all readers will enjoy all of an author's books, although I find that my readers do follow me around the bookstore. My Claire Delacroix books were originally all historical romances - now they're future-set, but still "not contemporary" - and my Deborah Cooke books are contemporary romances. I tend to include fantasy elements regardless of "author brand", but that's a reflection of my own interests.

Traditionally, there was also a concern with an author's frequency of publication. When I sold my first book in 1992, it was believed that romance authors shouldn't have single title publication dates more often than once every 8 to 12 months. People who wrote more quickly than that - like me - tended to write under two names, to have more publication slots. Over time, publication schedules have accelerated, although most single title print houses still want a maximum of two new titles per year per author name in the romance section. There are obvious exceptions which makes me guess that the acceleration will continue.

Tough to choose only three, but I'll try -

• The Sculptress by Minette Walters. 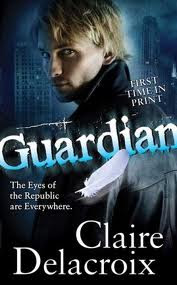 I love reading. I was one of those kids who was always reading. As a result, I was usually making up stories, about kids like me or kids not like me, at least when I wasn't reading. I had a teacher in high school who suggested that I could be a writer myself, but the idea was so startling that it was a good decade before I sat down and wrote anything that wasn't an assignment. Now I can't imagine doing anything else.

In this series? No! I'm happy to live vicariously through them, in this particular world.

When I was a teenager, I wrote a version of The Lord of the Rings that had the romance of Arwen and Aragon as the spine of the story. I thought that romance was behind a lot of the story and shouldn't have just been in the appendix. It was a fantasy romance - fan fiction, really, but before fan fiction was a big thing. Fortunately, I composed most of it in my head and very little of it was ever written down - I didn't think it was allowed to write down stories in another author's world, using another author's characters - and what was written down is long shredded and gone. The world is a better place for that, I think, although it would be fun to write that story now. I was right, though: it's not allowed!

> Has having a history degree helped with your writing?

I think having a history degree and an interest in social history helps with worldbuilding. I worry a lot about where products come from in my fictional world, about cause and effect, and probably a bit too much about religion and politics. There are always "compare and contrast" essay questions about my world in the back of my mind! That makes the fictional world more dimensional for me, and - with any luck - for my readers, too.

I have an office at home, where I do most of my writing. I write every day, as that keeps the story in my head. The precise time changes, especially when I'm working out a plot twist or when I have promotional obligations, but I aim to work a certain amount each day. 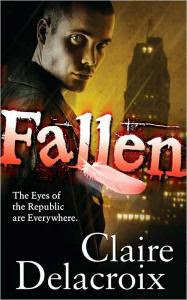 I love writing. I love telling stories. I love pushing myself to learn new things and to try new techniques. I also love doing the research to support a new story. That's the best part about writing, the writing itself. The worst thing about writing is that it makes it harder to be a reader. I don't read other people's fiction when I'm writing my own - that means with my current schedule that most of the time, I'm not reading fiction. When I do read fiction, I'm much more critical than was once the case. It's harder to just go with it. My analogy is that of the stage magician going to a magic show on his day off, and spending the entire time looking for the wires, or trying to figure out how each feat was accomplished, instead of just enjoying the show.

I knew NOTHING about publishing when I sold my first book. There are still great swaths of the business that remain a mystery to me - partly because the only constant in publishing is change.

Tell the story that you want to write, not the one that you think will sell. Inform yourself about the publishing business and its realities. Don't be afraid to ask questions. 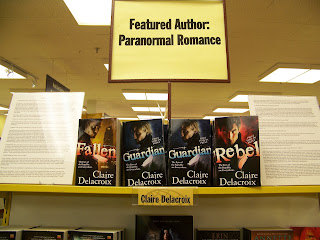 I had three book manuscripts in a kind of rotation when I started out. I'd revise one and send it out, then while I was waiting to hear back on that work, I'd revise the second one. It took 4 to 6 months at that time to hear back from editors and agents. Two of those works never sold, one because I didn't have the skill to construct the story at that point and because paranormal romantic suspense wasn't marketable twenty years ago - yes, I do intend to dig that out and revise it again. - The second never sold because I was trying to write something marketable, even though that kind of story wasn't my kind of story. The third was my medieval romance, ROMANCE OF THE ROSE, which did sell. By the time that book sold, though, my rejection letter file was close to an inch thick. (I still have it somewhere.)

One big difference is that in the early 1990's, editors and agents wrote real letters if they thought the work had promise. Some of my rejection letters were pages long, and all of them included useful advice. I learned a great deal from those rejection letters, and learned it from the people who were decision-makers in the industry. These days, industry professionals are so pressed for time that authors seldom get such detailed letters - the one-line rejection letter is much more common than it was. In my whole fat file, in contrast, I had just one of those letters. That change puts new writers at a disadvantage. On the other hand, there are a lot more writers' groups, writing blogs, publishing blogs and books about the industry available. There's more general information that is widely available, which gives new writers an advantage in learning about the industry as a whole.

Email ThisBlogThis!Share to TwitterShare to FacebookShare to Pinterest
Posted by Jessica Strider at 11:17

As always a great interview, I loved the fact that you don't consider writing a chore but that it takes away from your reading time and I also love the advice you gave to hopeful new authors.
Thanks for being one of my favorite authors
'
Deb

I agree with Debbie, and like that writing isnt a chore for you. I also like that through the interviews you give it is so easy to connect with your ideas. I love your work, and look forward to the next book i can get my grubby little hands on!

Thanks for giving your readers worlds in which we can get lost and enjoy being lost!

Thanks Debbie! I appreciate you stopping by to comment, and your support of my books.

And hi, Sam! Thanks to you as well for following me around the blogosphere.

Of course, thanks to Jessica, too, both for the display and for doing the interview.