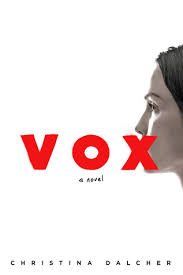 A year ago life changed for 50% of the US population. Women were kicked out of the workforce and made to wear bracelets that counted their words. When they reached their cap of 100 words, they received an electric jolts of increasing intensity until they stopped talking. Members of the LGBT community were shipped off to ‘camps’.

A year ago Dr. Jean McClellan was a top cognitive linguist researching Wernicke’s aphasia, an ailment that makes it difficult to form coherent sentences. Now she’s a stay at home wife, slowly watching her marriage crumble, her daughter suffer under the word restrictions, and her oldest son become a misogynist.

When the President’s brother has an accident that affects the Wernicke area of the brain, she’s asked to help find a cure, little knowing that there’s another reason the government wants her work.

The book is very fast paced and only look me 2 days to whip through. It’s first person narrative makes the world immediate and the clever use of flashbacks fleshes out the characters and how the US changed so quickly.

Loss of freedom is always an interesting plot device, and this book touches on real fears American women have during the present political climate. The book joins other US dystopian novels that focus on how women could be repressed like Margaret Atwood’s The Handmaid’s Tale, Veracity by Laura Bynum, and When She Woke by Hilary Jordan.

There are some powerfully emotional scenes, some of which were rage inducing, while others made me want to cry. While I often didn’t agree with Jean’s choices, I could understand why she made those decisions and sympathized with her plight.

While the book explained that Wernicke’s aphasia impairs the ability to speak coherently, it would have been good to point out that it doesn’t always impair cognitive abilities outside of communication. I was left wondering if people who had it would be able to function or if they would have to be put into care homes.

There were a few minor issues that annoyed me, like cookbooks being banned when you would expect they would be needed. You can’t remember every recipe or learn new ones without some sort of help. There’s also a scene where Jean had just under 40 words remaining in her day and she had to make a phone call. She prepared her message in advance but used her whole allotment, even though several of the words she used were unnecessary. What if she’d had to respond to a question afterwards? She’d have had to stay silent.

The ending felt a bit rushed in that I would have liked a more complete telling of what happened. I understand why it wasn’t comprehensive, but it felt like the author could have provided an alternate viewpoint or arranged to have a witness describe the event in more detail.

It’s hard to call a book that does so many horrible things a pleasant read, but it was. Normally dystopian novels leave me horrified by how things could go in the real world while this one left me feeling energized, and feeling that the resistance can succeed if good people fight for their rights.
Email ThisBlogThis!Share to TwitterShare to FacebookShare to Pinterest
Posted by Jessica Strider at 10:36

Many thanks for the review of VOX, Jessica! Much appreciated.
Cheers,
Christina