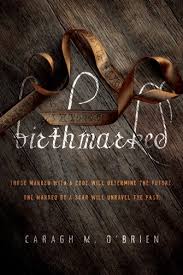 Sixteen year old Gaia Stone has just delivered her first baby solo, and though taking it from its mother and giving it to the Enclave is the right thing to do, for some reason she feels bad about it. Then her parents are taken by the Enclave and she’s questioned about their actions. Gaia can’t understand why her family has been targeted when they’ve always followed the rules. But she’s going to get her parents out of prison no matter the cost.

Set in a future where conditions are harsh, the Enclave is a walled city on a hill where everything is perfect, at least as far as Gaia’s concerned. She lives outside the wall in Wharfton’s Western Sector Three, helping her mother deliver babies and sending the first three babies of each month to the Enclave to be adopted by its inhabitants. But life inside the Enclave isn’t as rosy as Gaia believes.

I really liked Gaia. She starts the book very naive about what she’s doing, not questioning the Enclave’s orders at all. Otherwise, she’s pretty feisty and willing to fight for her family while still doing what she believes is right. I liked that she had to make some difficult decisions, and that there were some consequences - though not as many as might realistically happen. She does forgive herself quickly for some actions that I suspect would take longer to get over.

Though a minor element, I thought the romantic relationship she develops came about naturally. It evolves slowly and involves a lot of questioning, making it feel realistic.

I thought the setting and premise were interesting, especially when more of the Enclave was revealed.

I was surprised by how many people - inside the Enclave - were willing to help Gaia. Considering what the penalty was for helping a fugitive, it seemed more people were willing to risk death than I thought credible.

There is a huge plot hole that gets larger the more you learn. Basically, the Enclave imprisoned Gaia’s parents to get some information they desperately need. But Gaia’s parents want the flip side of that same information, so there’s no reason for them to not cooperate with authorities by hiding what they know. While recording the information might have been a problem in the past, the Enclave is now happy that Gaia’s parents have it, and presumably weren’t going to punish them for the records that it now needs. So I was left wondering why her parents didn’t say what they knew, thereby helping out the Enclave and the parents in Wharfton (though maybe they were afraid the parents wouldn’t be given the information).

I also had a hard time believing the Enclave wouldn’t record who the birth parents of the kids adopted into the Enclave were - and yes, a reason was given in the book, but governments are good about keeping secret records, and making sure to avoid incest seems a very good reason to keep records.

I enjoyed the book and it was a quick read, but the plot hole grated the further into the book I got so I probably won’t finish the trilogy.
Email ThisBlogThis!Share to TwitterShare to FacebookShare to Pinterest
Posted by Jessica Strider at 21:30