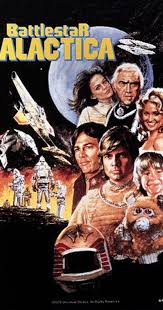 I saw this a few years ago when I watched the 2004 remake, but watched this again today so I could compare it to the first two issues of the 1979 comic books (volumes 1&2), which I will be reviewing on Tuesday.

Just before the peace negotiated by Baltar between the alien created Cylons and the humans of the Twelve Colonies, can be ratified, there’s a surprise Cylon attack.  But they don’t just destroy the fleet, they also target the colonies themselves.  Only one battleship remains: Battlestar Galactica, which escorts the remaining survivors on a quest to find their ancestral home: Earth.

The pilot episode had a lot of ground to cover and clearly didn’t want to spend much of that time on the destruction of the fleet and colonies, taking a fair amount of time to set up some of the characters on Galactica, then jumping ahead to the humans in their scrounged ships leaving on their quest.  Having said this, a surprising amount of time is also spent on a planet they encounter later in the episode that might have been better served as the plot of the next episode, as it tells a mostly self-contained story.  But this first episode was apparently marketed as a TV movie, so maybe they needed to fill out the time slot.  And maybe the battle/destruction would have cost too much to do properly, so they opted to bypass most of it.

The character building at the beginning does mean several protagonists are quickly remembered, which I thought was well done considering the size of the cast.  I also liked that there was some diversity in the cast.

The acting’s pretty good, if at times over the top - I’m looking at you, Starbuck.  The scene with Zac at the beginning gets quite tense.

I have to admit that Boxey, the kid, is kind of annoying, as he’s always running off.  While I liked his mother (played by Jane Seymour), she’s clearly unable to keep track of him.

The special effects are quite good considering when this came out.  There are a lot of similarities to Star Wars in this respect, with the heavy use of models and lazers lights.

The world created is quite rich, with specialized terms.  It’s only touched on but the different colonies appear to have some different accents/dialects, religious practices, etc.

One of the best aspects of the show is the music, which was fully orchestrated and sounds amazing.

The show has a bit of camp - as must be expected given when it was made.  But the remake took a lot of liberties with the story (and made some great changes), which makes the original worth watching.

Email ThisBlogThis!Share to TwitterShare to FacebookShare to Pinterest
Posted by Jessica Strider at 20:38