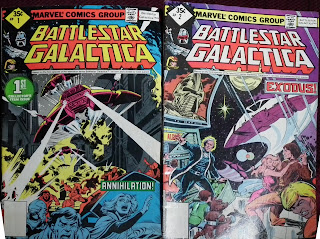 Just before the peace negotiated by Baltar between the alien created Cylons and the humans of the Twelve Colonies, can be ratified, there’s a surprise Cylon attack.  But they don’t just destroy the fleet, they also target the colonies themselves.  Only one battleship remains: Battlestar Galactica, which escorts the remaining survivors on a quest to find their ancestral home: Earth.

Written in 1979 and based closely on the TV show that aired the year before, the comic books are fun to read.  Some scenes from the show are removed, likely due to space (some of the set up with Zac and Apollo’s mission, Starbuck talking with Athena while she’s changing, etc.).  The missing scenes tend to be character development moments, things that help with getting to know who everyone is and the interpersonal relationships between them.  Unfortunately, losing Zac’s scenes removed some of the tension the TV episode builds up.

The first issue ends with the ships heading out on their quest to find Earth.  The second comic covers the pilots checking over the ships in the new fleet and ends with them beginning their mine field piloting mission.  I suspect a third issue would finish the events of the pilot episode.

The artwork is nice, and follows the designs of the show closely.  I didn’t realize until I watched the show that the pilots helmets look like ancient Egyptian headdresses, which was kind of neat.

The comic also does away with the narration that the episode begins with, which explains that this all takes place somewhere distant.

I suspect the comic was meant to drum up interest in the show and/or be a collector’s item.  It’s a neat piece of history.
Email ThisBlogThis!Share to TwitterShare to FacebookShare to Pinterest
Posted by Jessica Strider at 08:08