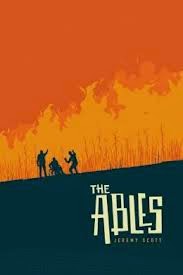 Cons: several small errors ruined immersion, some aspects of the story were hard to believe

For Parents: some swearing, some violence

The day before starting grade 7 at his new school in Freepoint city, Philip Sallinger’s dad takes him aside for ‘the talk’.  But it’s not the sex talk Philip expected.  He, his parents, and most of the people in their remote city, are superheroes, or as they call themselves, custodians.  But Phillip’s blindness creates an obstacle with regards to using his power, and he finds himself in the special education class with others who have physical and mental differences.

Along with his new friends, Phillip must overcome the prejudices of those around them, and help protect the city from a dangerous enemy.

The novel is told from Phillip’s point of view and while much of the book includes visual clues to what’s happening, there are a lot of auditory and other sensory descriptions as well.  The book takes Phillip through a variety of challenging experiences and it’s great watching him grow up, even if he does make a lot of mistakes.

The group of kids on the whole was excellently written.  They’ve each got a disability (two are blind, one's in a wheelchair, one has down syndrome, one has extreme asthma and one has ataxic cerebral palsy), but they’ve obviously learned to adapt and end up doing a large number of remarkable things throughout the book.  The author never forgets that certain things are more challenging for them, but also shows that those challenges are surmountable by determined individuals.

There were a number of problems with the novel, some of which are probably not things regular readers will notice or care about.

For example, we’re told early on in a mini history lesson that a pre-Biblical group of superheroes, who faced off with a supervillain, called themselves “the Ables”. This made no sense to me.  We’re given the etymology for the use of the term ‘custodians’, so it struck me as wrong that a late middle English word would be used to describe an ancient group (especially by themselves).  Yes, you could argue that it’s the modern translation of the word they would have used, but then why not use that word, or at least tell us that word?  English didn’t exist as a language when this group was alive, and it would have made the superhero world’s history sound more authentic if an older word had been introduced with it, a la: “They called themselves ‘ipa’, which is Aramaic for ‘having the means to accomplish a task’.  We call them the Ables.”

Occasional imprecise use of language kicked me out of the narrative.  By which I mean that something was implied in the text that’s later explicitly refuted.  There’s a scene where something embarrassing happens and Phillip wakes up wondering what rumours would be circulating.  The impression I got from the scene - from the language used - was that this was the next morning after the event happened, but a few pages later I learned that several weeks had passed.  I was left wondering why he’d be worrying about rumours that he must have heard by now and were likely dying down by this point.  Each time this happened I found myself rereading the earlier section to figure out if I’d read it properly and/or had missed something.  On one occasion I realized that Phillip had assumed something that turned out to not be true, but on others the text really did contain a contradiction.

I also spotted a few minor continuity errors, but these didn’t impact the story at all.

There were some aspects of the story that I didn’t really believe.  There’s only been one death in a SuperSim over numerous years - despite the variety of powers on display and lack of training many of the kids apparently had - and that one death was caused by an inability to see?  the SuperSim seems like the kind of activity that would, at the least, injure several people each year, regardless of how careful everyone tried to be.  I was surprised that grade 7 students were allowed to participate at all, considering they were just gaining their powers and hadn’t had much training yet.  The kids in the book learn so much more about their powers outside of school than inside of it that I wondered what official superhero training they were receiving, beyond history lessons, that would even prepare them for the superhero life.
I thought that the fallout from Donnie’s accident was overblown, considering his down syndrome had nothing to do with what happened, though this was pointed out by Phillip in the text.

Certain aspects of the plot were a little predictable, but on the whole the book went in directions I didn’t expect, with the SuperSim and other actions.

Despite these issues, the writing for the most part was smooth and entertaining.  There’s a lot of variety in the action and the book is never boring.  There are a few swear words used - in a realistic context - at the end of the book and minor violence a certain points in the book.

While I enjoyed the book, particularly the unique point of view and characters, the number of times I was jolted from the story due to small errors decreased my immersion.  There’s a lot to like here - especially protagonists not generally seen in fiction at all, let alone a superhero story, and I do recommend it.  Just try not to read it, as I had to, with a critical bent.

As a side note, Jeremy Scott does the amazing Cinema Sins videos.  If you haven't checked them out, you really should.
Email ThisBlogThis!Share to TwitterShare to FacebookShare to Pinterest
Posted by Jessica Strider at 11:32

Well said! The only continuity error I just couldn't let go of was when he said the character with only one arm put "his head in his hands". (I remember thinking, "what the heck? Losing an arm is a pretty traumatic event, guess Jeremy didn't get as invested in that as he should have") :-P

Overall though I really enjoyed the book. Can't wait to read the sequel!