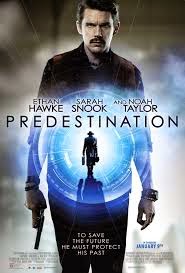 A man walks into a bar and, on a bet, tells the bartender the unusual story of his life, beginning with when he was a little girl.  But the bartender’s story is even more unusual, because he is a temporal agent, travelling through time to catch a terrorist bomber.

Based on the short story “All You Zombies” by Robert Heinlein, this is a difficult movie to review because the entire plot revolves around a series of revelations that would spoil the film to mention.  Ethan Hawke and Sarah Snook give amazing performances in their roles.  Sarah has to play both a woman and a man, which she does very well, though it’s obvious when he appears in the bar that it’s a woman transitioning.

This is a movie that will make you think.  The premise revolves around the belief that it’s possible to change events in time, even as the characters find themselves acting out their lives as if following a script.  The question becomes whether they actually have agency or if their lives really are predestined, as the title suggests.  The storytelling isn’t entirely linear so don’t be surprised if there are aspects of the plot that don’t seem to make sense right away.  When you get to the end you’ll find yourself thinking and rethinking about the plot of the film, putting the pieces into place and realizing the genius of the movie.

The downside is that the film depends on a paradox that doesn’t actually work, even if it’s an interesting, if creepy, idea.

I did wonder how Sarah’s character didn’t get an idea of what was coming, based on her changed appearance, but that’s a minor quibble.

Ultimately, this is an unsettling but interesting film that will stay with you after the credits end.


Email ThisBlogThis!Share to TwitterShare to FacebookShare to Pinterest
Posted by Jessica Strider at 09:30