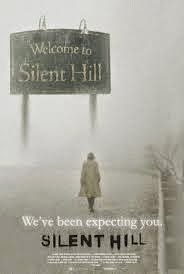 A woman brings her adopted daughter to the home town the girl has nightmares about: Silent Hill.  Meanwhile, her husband investigates the town and discovers some horrible things have happened there.

If you’ve played the Silent Hill video games you know what to expect from this movie: lots of fog, creepy monsters, a witch cult and hunting for clues in a deserted town.  The film is pretty linear, and while Rose (Radha Mitchell), the mother, does have to piece together a few mysteries, most of the clues fall into her hand with little effort.

I liked that the atmosphere of the city matched the game.  When the sirens call the town changes to its ‘hell’ variant, and it’s quite terrifying.  While the film doesn’t use all of the monsters in the games, it does a great job with the ones it does use.  They’re quite horrifying to look at.

There’s a surprising lack of violence, given the game’s about bashing monsters with pipes and shooting them with ammo found lying around.  Rose has no weapons, so she ends up running a lot and/or being saved by one of the other characters roaming around.

I was impressed that Rose figured out Dahlia’s connection with her daughter.  Had I not seen the game I would have missed that completely, as the movie doesn’t really explain it.  The plot of the movie follows the first game pretty closely, except that Dahlia’s complicity is changed and the final twist - the reason the girl is burned - is completely different here.

The scenes with the husband (Sean Bean) were interesting, but the information gained may not have been worth breaking the atmospheric bubble that normally surrounds Silent Hill.  In other words, it may have been better to have Rose discover those things in the town rather than shifting the view from the town.

If you haven’t seen or played the games you may have trouble understanding the ending of the film, which - like the game - has a fair bit of exposition that somehow doesn’t clarify things.

Still, it was entertaining and had some great special effects.  It was also nice seeing several women playing major roles.

I haven't played any of the games, but I saw the film when it came out and was very impressed. Visually it is stunning...disturbing, but stunningly so. The sound helps create such an eerie atmosphere and overall I really enjoyed it. And I'm not normally a fan of this kind of film. I liked the scenes with Sean Bean well enough, but I don't have the game story to compare it to. Its one I own and occasionally will pull it out to watch it again.

I find playing games like this stressful, but I love watching my husband play them, as long as the story's interesting. Silent Hill has some great effects, and the different games use horror in different ways, which I like. I think the film captured the ambiance, and as it stuck to the plot, I found it pretty enjoyable.