Movie Review: The People Under the Stairs 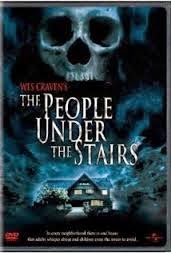 Fool’s just turned 13 and his family’s being evicted by money grubbing landlords.  When a burglar friend suggests he joins him robbing the landlord’s gold collection, he reluctantly agrees.  But the house contains some terrifying secrets.

I remember liking this movie as a teen and recently rewatched it.  I was impressed by how well it held up, probably because Craven spends some time setting up a realistic scenario in which this boy would help break into the landlord’s house.

Once they’re in the house, things go crazy.  Another aspect I loved was that though the scenario is pretty terrifying, the movie itself isn’t that scary.  There are a few jump scares but little gore and more potential terror than actual horror.

The film’s format is also different from most horror films in that there’s a calm at the three quarter mark where the protagonist makes a fateful decision.

While the bad guys aren’t that well defined (just crazy), they’re fun to watch in action and remarkably intelligent in that they’re able to deflect the police that show up at one point.

Some of the special effects are cheesy - any scenes with falling are done at a higher speed, which makes them look fake.

If you like gore and terrifying movies, give this a pass, if you like lighthearted horror, this one’s pretty good.
Email ThisBlogThis!Share to TwitterShare to FacebookShare to Pinterest
Posted by Jessica Strider at 10:32

Labels: Horror, Movie Review, The People Under the Stairs