The Game is the first book of a Swedish trilogy, recently translated and published in English.  It continues in Bubble and Buzz.  The synopsis sort of reminds me of Erebos, which I really liked.  Or the film, The Game, with Michael Douglas, which I also liked.  Not sure if there's any SFF content, but it still sounds cool. 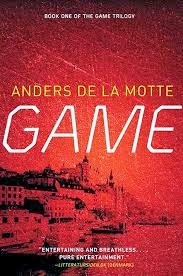 Aimless young Henrik "HP" Petterson finds a cellphone on a Stockholm train that invites him to play a game: in no time, he's embarking on daring, high-stakes missions that turn his ordinary life extraordinary. HP loves the thrill, and the rewards, but is there a sinister side to the seemingly innocent contest?

Meanwhile, ambitious Detective Rebecca Normén is moving up the career ladder in the Swedish Secret Service but is troubled by the handwritten notes she keeps finding in her locker. Whoever writes them knows way too much about her past. HP's and Rebecca's worlds inevitably collide. But if reality is just a game, then what is real?