Shout-Out: The Eidolon by Libby McGugan

Here's another book that's come out recently that sounds interesting. 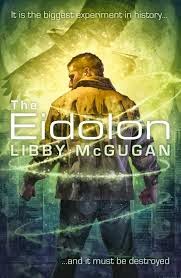 A contemporary SF thriller. The divide between science and the human spirit is the setting for a battle for the future.

When physicist Robert Strong loses his job at the Dark Matter research lab and his relationship falls apart, he returns home to Scotland. Then the dead start appearing to him, and Robert begins to question his own sanity. Victor Amos, an enigmatic businessman, arrives and recruits Robert to sabotage CERN'S Large Hadron Collider, convincing him the next step in the collider's research will bring about disaster. Everything Robert once understood about reality, and the boundaries between life and death, is about to change forever. And the biggest change will be to Robert himself... Mixing science, philosophy and espionage, Libby McGugan's stunning debut is a thriller like no other.