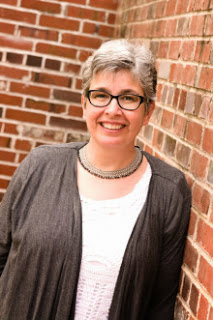 
> What is Ancillary Justice about?

Ancillary Justice is about a starship that once had thousands of human bodies as part of itself. Treachery has destroyed all but one of those bodies, and she's out for revenge on those who destroyed her.

> Where did you get the idea to write about a warship trapped in a human body?

I started, long ago, with the idea of human bodies as avatars of artificial intelligences.  Of course, one could grow those bodies, but taking them over by force provides extra drama, so I played with that for a while. And then, of course, I began to wonder what would happen if all of such an entity was destroyed except one of those bodies. Who would it be who was left?

I'm one of those people who has wished to be a writer since childhood. This may be because my parents always encouraged it--they assumed I would be someday. My mother explained standard manuscript format to me when I was about eight, on the assumption that it was one of those things I would need to know. And it was helpful, actually--even though at the time everyone used typewriters, standard manuscript format has changed very little.

Probably not. First of all, I make their lives way too difficult--as difficult as possible. Because that's where stories are, right? But also, when I was in high school and thinking of what a failure I would surely be as an adult and how inadequate I was bound to be at life in general, I had a moment when I was looking in the mirror wishing I were someone else. And then, for some reason, suddenly I realized that if I were someone else, I wouldn't exist--and I found I didn't like that thought. That, whatever my problems, really I wanted to be me. It sounds foolish and adolescent because, you know, it totally was. But it was something that stuck with me, and I've had times when I've had to remind myself of it. 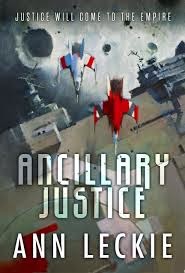 That would be a massive spoiler! It's the scene where the thing happens that is the reason Breq is doing what she's doing. I knew that if I didn't get that moment right, if the reader didn't completely believe that scene, the whole book would collapse in a heap, because nothing Breq did, throughout the entire rest of the novel, would convince. There was a lot of staring at the monitor and pulling my hair and swearing and panicking, while I worked on it.

> As you write both, beyond the matter of length, do you find it easier writing short stories or novels?

I find novels much easier! If you're trying to write under a word limit, so much awesome has to go! And some of my favorite stuff, not just as a writer but as a reader, is that extra stuff. The cool worldbuilding details or whatever. And I find my ideas tend to be elaborate--cutting them down to short story size can be very frustrating.

I also find myself worrying about length when I'm trying to do short fiction, which adds another layer of anxiety to the process. With a novel there's enough room that I can feel comfortable stretching out and then going back later and paring down if I need to.

I try to write daily--though I don't always succeed. I'm lucky enough to have the house to myself during most days, and I have an office in my basement that my awesome husband built for me. But distractions do arise, more often than I'd like.

The best thing is that it's so darn fun. I mean, I get to make cool stuff up and put it down on paper! The worst is the uncertainty--there's no way to know if what I'm doing is going to ever be read by anyone else, whether it's going to sell, whether anyone else will like it at all. And the internal critic comes along with that, the little voice that keeps muttering about how I stink, I have no ability, what I'm working on is stupid, etc. I hate that. 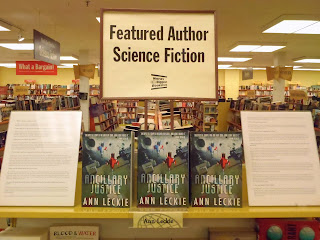 So, I actually knew a fair amount going in. My approach to things is generally pretty research-intensive, and so I'd spent some time talking to people and reading blogs and such, and already had a fair idea of the general process.  It's been the little details that have been a discovery for me--the way a certain amount of the advance gets paid at various stages of the process of publishing the book, the work my publisher's (fabulous and awesome) publicist does, the process of designing the cover, of getting to see that in various stages. It's been a lot of fun so far.

Yes! Don't worry too much about rules, or about whether what you're working on is salable.  Don't fret over, say, the fact that you've heard editors don't like narrators who are mushrooms, and your story is the first person adventures of Mable the Morel. Don't worry about that. Just make Mabel the best dang fungus that ever graced the written word, do the absolute best you can at what you're doing, and trust the universe for the rest. The universe may or may not come through--but you'll know you did your best, and over time I've found that's incredibly important.

Learn techniques, not rules. Look for effects various techniques have (or don't) and use them (or not) in your own work depending on the effects you want (or want to avoid). There are no rules, and worrying about rules and about superficial things editors may or may not like will only hamper you. Don't start out by limiting yourself. Be ambitious. Reach for the stars! If you fail, no biggie. Pick yourself up and dust yourself off and try again.

My approach, I've found, is idiosyncratic. But I'll offer it, in case anyone reading this may find it helpful. When I'm stuck, I read. Sometimes fiction, and often nonfiction. I go to the library and start scanning the shelves--usually history or anthropology, but sometimes other areas, sometimes at random--and pull out any book that seems to intrigue me. Usually, after I've read a bit, I find something that clicks, and then I can go forward.

Fantastic interview! Thanks for all the great info. It always amazes me how even though we all have the same craft, the way that we decided to become writers and the way that we face problems is so different.