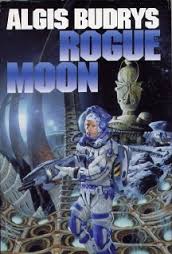 A structure is found on the moon and Dr. Hawks is in charge of the program to discover what it is.  Towards this end, he's created a machine that duplicates volunteers in such a way as when the copy on the moon dies - as it inevitably does - the one on Earth can explain what happened.  Unfortunately, all of the Earth copies go insane upon death.  Hawks decides to look for a new type of volunteer, one who doesn't fear death.  Which brings him to Al Barker.

The premise sounds cool, doesn't it?  Humans being duplicated, exploring an alien structure whose purpose and creators are unknown.  But the book is less about the structure on the moon and more about the interrelationships between Hawks, Barker and the people around them, as they try to manipulate each other into fitting their personal world views.  Including their views on death.  While you do, at the end, get to see the structure on the moon, it's almost shown as an after thought.

Meanwhile, the psychological thrust of the story might have been interesting if 1) the author had chosen to show how each of the principle characters believed things differently instead of simply having them tell each other how they believe the others see the world and 2) if the characters were likeable.  There was little depth or development to the characters due to being told everything about them instead of seeing how they react to each other over time.  Everyone also passes quick judgements that are inevitably true - despite making these pronouncements, in some cases, based on short aquaintnce or solely on the information of others. Indeed, on a few occasions characters told stories about themselves that seemed to have no relevance to the plot at all.

I have to say I found the book disappointing.  It didn't deliver the SF plot I was expecting and several of the conversations and personal developments seemed to go nowhere or make judgements I couldn't follow.
Email ThisBlogThis!Share to TwitterShare to FacebookShare to Pinterest
Posted by Jessica Strider at 11:30

wow - what a different read you had from the one I've had each and every time I've read this absolutely killer novel.

It's impossible to tell someone that they ought to have liked something when they didn't, but...

the character studies in 'Moon are pretty stark and effective; Connington, Pack and Barker are such an odd couple; Connington is ruthless, Pack manipulative, Barker strong and enigmatic.

And the thing on the Moon is truly horrifyng. It kills, and kills again and the only way to find out why is to let it keep on killing.

Truly one of SF's greats.

I imagine expectation had a lot to do with my negative impressions. I really wanted more information on the structure on the moon, so the interpersonal relationships weren't as interesting to me. Had I known in advance that the book was more about the characters, I might have enjoyed it more.