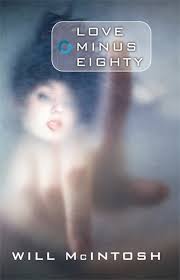 Short Stories: way too many to mention, but you can find them listed here

> What is Love Minus Eighty about?

It’s about a cryogenic dating center, where young, beautiful, dead women try to convince wealthy men to pay a massive fee to give them a second chance at life.  It’s about Rob, a poor young man who runs over Winter, a beautiful young woman, then sells everything he owns to visit her at the cryogenic dating center to apologize for what he’s done, only to fall in love with her.  It’s about love and dating, one hundred years in the future.

> Why did you decide to expand your 2010 Hugo Award Winning story, "Bridesicle" into the full length novel Love Minus Eighty?

When I finished the story, I thought I was finished with the Bridesicle world, then an idea came to me: What if you accidentally killed someone, and she ended up in the bridesicle dating center, and you felt compelled to visit her to apologize?  I thought that was a scenario worth exploring.  The novel grew from there.

> Would you say that having a psychology degree has helped you as a writer?

Probably not as much as it might seem.  My degree is in Social Psychology.  I was an experimental psychologist, so I didn’t see clients.  I conducted research and analyzed data (and, of course, taught classes).  Sometimes some of the things I learned as a psychologist--about the nature of memory, or characteristics of successful romantic relationships, or the symptoms of obsessive-compulsive disorder--come in handy.  But a degree in experimental psychology doesn’t really prepare you to delve into the psyche of one particular individual, real or fictional. 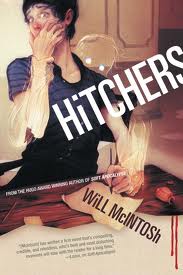 It grew slowly.  It started on a lark, grew into a hobby, and I loved it so much that when it became feasible to write for a living, I couldn’t imagine a more enjoyable and fulfilling vocation.

> In the books you've written, who is you favourite character and why?

I’d have to say it’s Deirdre, the manic, extremely damaged love interest of the protagonist in my first novel, Soft Apocalypse.  She turned out so much more strange and compelling than I’d intended.  After the novel was published, a young aspiring actress emailed to say if the book ever became a movie, she absolutely wanted to play Deirdre.

I can’t think of one of my characters who hasn’t had a hard life.  Some of them are dead and frozen (in Love Minus Eighty), some were possessed by their dead friends or relatives (in Hitchers), and many lived (or didn’t live) through an apocalypse (in Soft Apocalypse).  I wouldn’t trade my relatively trauma-free existence, or my pleasant life as a writer, with any of theirs.

I can write a 100,000 word novel more quickly than I can write 100,000 words of short stories, because you only need one central idea, one setting, and one set of characters for the novel.  But novels take more out of me, because it’s hard to build such a big story with a consistent pace and voice, and to keep track of all the details of what happened when. 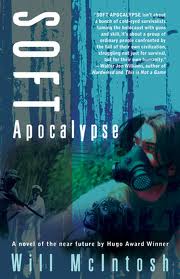 > How long did it take you to write your first novel?

About two years.  Not counting the year I set it aside, because it was badly broken.  When I went back to it, I rewrote about two-thirds of it.

Since I quit my position as a psychology professor last year, I write nine to five, Monday to Friday, minus an hour for lunch/exercise.  I write in a recliner, with my laptop on a lap bench  (I have back problems, so sitting at a desk seven hours a day is uncomfortable).  The recliner faces a big window that looks out at  woods and a hiking trail that runs close to our house.  Music is always playing, loudly, while I write.

The best thing is the creative side.  Coming up with ideas, inventing characters, figuring out what will happen, what the world will look like.  Getting a flash of inspiration about a terrific plot twist or a powerful, emotional confrontation between two characters.

The worst part is the uncertainty.  Writing is a very uncertain way to make a living.  Once you finish a novel, copies are printed, your book is placed on shelves with a million other books, and you have no idea if it will do well, or tons of copies will be sent back to the publisher to be pulped.  If it’s the latter, you’re not going to make a living as a writer for very much longer.  You have to hope people will notice your book, buy it, enjoy it, and tell others about it, because that’s how a book becomes successful.

That the author has very little say about what will be on the cover.  I consider myself the luckiest writer in the world that the cover of Love Minus Eighty is as beautiful as it is.  I had absolutely nothing to do with it--it just appeared as an attachment on an email message from my editor one day.  Here’s an interesting exercise: walk around the bookstore and look at the art on the covers, and imagine how you would feel if you’d written the book, and this was the art that would represent it.  You can feel elated or crushed looking at that cover for the first time.  I was elated.  My agent said when he first saw it, he printed it out and ran through his office showing it to everyone. 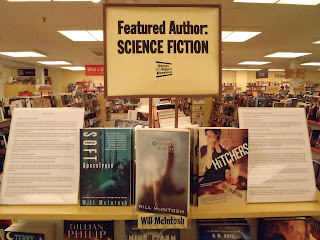 Write a lot.  Write as much as you can, and at first don’t worry too much about whether you publish what you write.  Seek feedback from writers who are a little farther along than you are, and ask them to be honest.  Crave their criticism more than their praise, because the criticism will help you improve more quickly than the praise, and that’s all you want—you want to get better.

If you get stuck, either switch to another writing project, or skip ahead and work on another part of the story you’re writing.  Usually you have to step away from the block, give it some space, try not to force the next scene to come.

It’s the other way around for me.  I have to discipline myself to stop.  I love to write.  If I sit down in the morning and know that I have seven hours of writing ahead, I’m in my glory.  I know many writers struggle to get their butts in the chair and get some words on the page, but I’ve never, ever had that experience.
Email ThisBlogThis!Share to TwitterShare to FacebookShare to Pinterest
Posted by Jessica Strider at 10:14