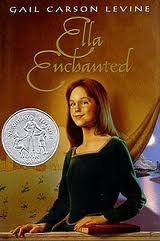 Cons: it seems unfair that Lucirda doesn't undo the spells she casts

Ella of Trell was given the fairy gift of obedience at birth, she must do whatever shes ordered, whether it's to put on a cloak or let ogres eat her.  After the death of her mother she is befriended by Prince Charmont and sent to finishing school with the odious daughters of Dame Olga. One of whom has learned her secret.

While the film version of his book was fun, it depends more on slapstick for its humour than anything else. The book on the other hand, has a delightfully humorous slant of a different nature.  Ella loves making Char laugh, and comes up with fantastic stories that bring him, and the reader, delight.

The novel uses its own brand of elves (human sized, green skinned), ogres (able to hypnotise others with their language) centaurs (near mindless animals) and more.  Each race and county uses a different language and has vastly different cultures.

The curse adds real tension to Ella's romance with Char and her dealings with others. You can really feel her horror at having to obey everything and the underlying fear that someday that obedience will kill her.

This is a fantastic book. Don't let the kids categorization stop you from reading this delightful and clever retelling of Cinderella.

My only complaint is that after Lucinda realizes the trouble she's caused with her gifts, she doesn't remove them. I know the point of the novel is for Ella to break the curse herself, but Lucinda caused a lot of harm with her gifts and gels off rather easily.
Email ThisBlogThis!Share to TwitterShare to FacebookShare to Pinterest
Posted by Jessica Strider at 09:10