Women in SF Month and YA Book Scavenger Hunt

Fantasy Book Cafe is hosting a Women in SF Month in April and I'll be doing a guest post there, so swing by during the month (or better yet, follow her blog) and see what's happening.  The first week's line-up includes: Nancy Kress, Elizabeth Bear and Carol Berg.

I stumbled across a blog called YA blog scavenger hunt that is currently hosting a scavenger hunt.  Up for grabs are 3 batches of 20 signed YA books.  To win, you have to follow one of three hunts, red, blue and yellow (and yes, you can enter all three).  Find the hidden letters on each blog, make the phrase, and enter the contest.  Most of the blogs are having side giveaways for swag and extra books as well as showing exclusive content.  The hunt ends at noon on April 1st, so you've got some time.   And it's an international contest.

I had a lot of fun following all three hunts, and here are some of the books I discovered along the way: 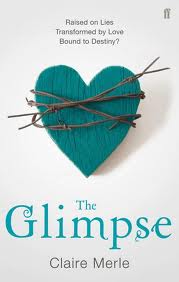 In a near future, society is segregated according to whether people are genetically disposed to mental illness. 17-year-old Ana has been living the privileged life of a Pure due to an error in her DNA test. When the authorities find out, she faces banishment from her safe Community, a fate only thwarted by the fact that she has already been promised to Pure-boy Jasper Taurell.

Jasper is from a rich and influential family and despite Ana’s condition, wants to be with her. The authorities grant Ana a tentative reprieve. If she is joined to Jasper before her 18th birthday, she may stay in the Community until her illness manifests. But if Jasper changes his mind, she will be cast out among the Crazies. As Ana’s joining ceremony and her birthday loom closer, she dares to hope she will be saved from the horror of the City and live a ‘normal’ life. But then Jasper disappears.

Led to believe Jasper has been taken by a strange sect the authorities will not interfere with, Ana sneaks out of her well-guarded Community to find him herself. Her search takes her through the underbelly of society and into the pits of the human soul. And as she delves deeper into the mystery of Jasper's abduction she uncovers some devastating truths that destroy everything she has grown up to believe, but she also learns to love as she has never loved before.


You can see the trailer for it here and enter to win copies on her website. 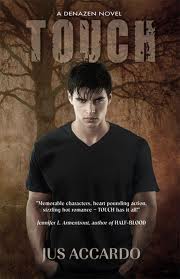 When a strange boy tumbles down a river embankment and lands at her feet, seventeen-year-old adrenaline junkie Deznee Cross snatches the opportunity to piss off her father by bringing the mysterious hottie with ice blue eyes home.

Except there’s something off with Kale. He wears her shoes in the shower, is overly fascinated with things like DVDs and vases, and acts like she’ll turn to dust if he touches her. It’s not until Dez’s father shows up, wielding a gun and knowing more about Kale than he should, that Dez realizes there’s more to this boy—and her father’s “law firm”—than she realized.

Kale has been a prisoner of Denazen Corporation—an organization devoted to collecting “special” kids known as Sixes and using them as weapons—his entire life. And, oh yeah, his touch? It kills. The two team up with a group of rogue Sixes hellbent on taking down Denazen before they’re caught and her father discovers the biggest secret of all. A secret Dez has spent her life keeping safe.

A secret Kale will kill to protect.

The premise reminds me of Shatter Me, which I really enjoyed. And here's Mr. Accardo's website. 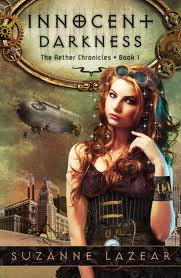 Sixteen-year-old Noli Braddock's hoyden ways land her in an abusive reform school far from home. On mid-summer's eve she wishes to be anyplace but that dreadful school. A mysterious man from the Realm of Faerie rescues her and brings her to the Otherworld, only to reveal that she must be sacrificed, otherwise, the entire Otherworld civilization will perish.

And while this last book doesn't fall under SF/F, it sounds pretty awesome. 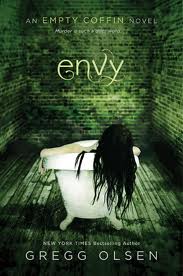 Murder is such a dirty word…

In Port Gamble (aka “Empty Coffin”), Washington, truth is about as hard to come by as a sunny day. One minute Katelyn is a depressed teen with a loser life. The next, she’s lying on a stainless steel slab, eyes glassy, skin frosted over, and very, very dead.

Down the street from Katelyn, twins Hayley and Taylor Ryan can’t escape the encroaching winter darkness. As they recover from the shock of Katelyn’s death, they realize how entwined they already are in the evil circulating Empty Coffin. And while they can’t explain it, an unknown force pushes them to uncover the truth. Is Katelyn Port Gamble’s first and only victim?

Makes me want to spend more time in the teen section.  There are a lot of other great books, so go check out the scavenger hunt.
Email ThisBlogThis!Share to TwitterShare to FacebookShare to Pinterest
Posted by Jessica Strider at 20:21