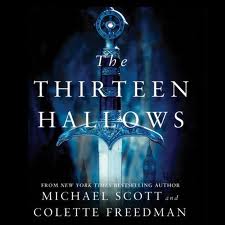 Read by: Kate Reading
Pros: fantastic narration, interesting interpretation of British and Christian mythology, good pacing, suitably evil bad guys
Cons: minor character and plot problems, lots of repetition
Judith Walker is aware that the other Keepers of the thirteen Hallows are being killed and her turn is coming.  So she's not too surprised when she's accosted one afternoon.  She is surprised that a young woman comes to her rescue.
Sarah Miller's life changes forever when she helps an old lady.  Her kindness leads shady characters to her home who later threaten her life, asking for what Judith Walker gave her.  Sarah must figure out what they want and honour a dying woman's wish to pass on and protect an ancient artifact.
The narrator, Kate Reading, did a fantastic job.  Her reading is crisp with different voices for each character, including accents.  And you don't understand just how jarring curses can be until you hear a woman playing a man, swear.
The book has good pacing, alternating between chase scenes, attacks and down time where you got to know the characters - both good and bad - as well as, eventually, more about the Hallows themselves.  I would have loved to learn more about each individual Hallow, but thought their background blended British mythology and Christian religion together in a fascinating way.  Perhaps the next book will explain more about the various holy objects and their powers.
A few things about the characters and the plot bothered me.  They weren't inconsistencies per say, but they did come accross as strange.  Sarah's actions with the sword for one, and her lack of care concerning the damage she does with it.  This is partly explained but I imagine she would still have a stronger reaction, given her character and the seriousness of her actions.
Another regarded the Dark Man.  He's been searching for the Hallows for years, slowly killing the keepers.  And yet, he plans his finale when he still has several Hallows left to acquire.  Seemed to me he should have waited a bit and secured the last ones before starting his final plans.
Given how fascinating the mythology of the book was, I was disappointed it took so long to dole out some of that information.  While the chases and attacks were interesting, if often gorey, I found the history of the Hallows a lot more compelling with regards to finishing the book.
I probably noticed this more because I listened to an audiobook rather than read the text, but the authors repeated information a lot.  It made it easier to pick up the story after a week, but it was also a bit irritating when I listened to long stretches at once to hear basic information repeated several times.
If you liked The Da Vinci Code, this is the book for you.
Email ThisBlogThis!Share to TwitterShare to FacebookShare to Pinterest
Posted by Jessica Strider at 10:50