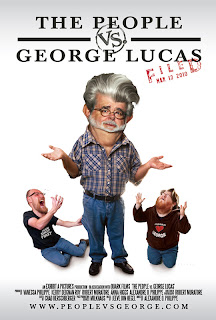 Thanks to Lou Anders at Bowing to the Future for the announcement that The People VS George Lucas will be premiering at South by Southwest (SXSW) Film Festival in Austin, Texas this March.

Apparently his interview clip made the final cut. Congrats Lou!

And from the press release on the blog:

"THE PEOPLE vs. GEORGE LUCAS explores the titanic struggle between a Godlike filmmaker and his legions of fans over the most popular franchise in movie history. “At its core, PvsG is the examination of a high-profile, dysfunctional love story”, says Philippe. “George created this humongous and intricate sandbox for us to play in; but is he the sole owner of it, or does it now belong to the ages? And what happens to your role as a creator when your audience claims it owns your art? We basically looked at the conflicted dynamic between George and his fans from a cultural perspective, and asked ourselves those questions."

Email ThisBlogThis!Share to TwitterShare to FacebookShare to Pinterest
Posted by Jessica Strider at 11:40

very good blog, congratulations
regard from Reus Catalonia
thank you