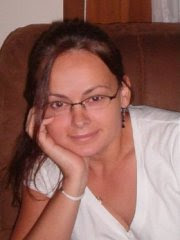 Novel:
The Better Part of Darkness

THE BETTER PART OF DARKNESS is my make-believe answer to the following question: What if our myths and traditions of heaven and hell were grounded in some obscure truth? What if the beings in these places were nothing like we had imagined, but as real and as diverse as the human race? And what would our world be like if they integrated into our society?

The story takes place in Atlanta about a decade after the Revelation (the discovery of two alternate dimensions: heaven-like Elysia and hellish Charbydon). Atlanta has become a crossroads of sorts, a thriving melting pot of human and off-world races.

My heroine, Charlie Madigan, is a divorced mother of one and her job with the Integration Task Force puts her right in the middle of the off-world population. It's her job, along with her partner, Hank, a siren from Elysia, to see that everyone obeys the law, but when a new off-world drug is released in Underground, her daughter is targeted, and her ex-husband makes a fateful bargain to win her back, there's nothing in heaven or earth (or hell for that matter) that Charlie won't do to set things right.

> What are your favorite three books?

This is a tough one! I have a large group of all-time favorites, but, let’s see . . . this time I’ll pick: THE MISTS OF AVALON by Marion Zimmer Bradley, THAIS by Anatole France, and INTERVIEW WITH THE VAMPIRE by Anne Rice.

I’ve thought a lot about this question, and I’m not sure I can pinpoint a particular ‘what’ that made me want to be a writer. I must’ve been born this way. J When I was a toddler (according to my parents), I’d tell them these incredible make believe stories and get myself all worked-up about it. As an older child, I was a ‘watcher’ more than a ‘participator’. I was quiet. I daydreamed a lot. And I gravitated toward books. When all the other grandkids were playing, I sat in front of my grandparents’ books shelves and lost myself in Time Life Books, especially the ones on ancient civilizations and mythology. Don’t get me wrong, I participated and played, but I always ended up back at the bookshelf. So, later, it was just a natural progression to start writing those daydreams on paper.

> In the books you’ve written, who is you favorite character?

Charlie, the heroine, is very close to my heart. She’s the super hero I wish I could be. In some ways, she’s very much like me, and in others she's the total opposite. And that’s what I like about her. When I write her, I can draw from my own deep emotions and experiences, but I can also draw from all these crazy, fictional ideas, too. Makes me feel, or hope, anyway, like she has a good balance of realism and fantasy to her.

Maybe for a day. I’d love to walk through Underground and meet a few off-world beings…

> If you could live in your fantasy/sf world, would you? Would you live in somebody else’s?

No to both questions. Escaping into fictional worlds via reading is a nice break for me, but to actually live in those worlds – my life is hectic enough without having to deal with the threat of otherworldly environments and creatures that haunt the pages of books. I like being safe and warm, curled up on the couch . . .

The first novel I wrote and finished (I’d started a handful before, but never got past the third or fourth chapters) was a paranormal romantic comedy. I wrote it in three and a half weeks during a patch of alone time away from my family. I did it to prove a point to myself -- that I could write a novel from start to finish. It was a lousy piece of work, I’ll admit, but once I knew I had it in me, it gave me the encouragement I needed to keep pursuing my dream.

I think the toughest scenes for me to write are descriptive scenes; places where I have give a sense of time and place. I get so involved in the story and the action (whether it’s good or bad things happening) that I want to move right along and stay in the thick of things.

> What is the strangest question you have ever been asked by a fan?

Fans? Me? Maybe, hopefully, one day! I had a few folks who read early copies of BPOD and wrote to tell me how much they enjoyed it. And, boy, is that an incredible feeling! To know that my work has entertained people . . . just awesome.

I’m having my first signing in December. I’m so comfortable behind the PC that the idea of leaving my comfort zone and actually meeting people . . .is a little scary, truth be told. Wish me luck!

This year, I’m hoping to attend San Diego Comic-Con and Dragon-Con. Those seem like a lot of fun.

I might hold the world record for how long it’s taken to get through college. I’m still trudging through. I take classes whenever I can, but several years worth of learning had to be put on hold when I started my family, etc… One of these days I’ll graduate! My major is not English, or Literature, or Creative Writing. It’s History.

These days, I write mostly on the couch with my laptop. I can never seem to get comfortable at a desk. I write new material in the mornings (for some reason the creativity flows better at that time), and I prefer to do revisions and editing in the afternoons. Of course, if there’s a deadline looming I’ll write whenever time allows.

The best thing is being able to do what I love. That’s really the ultimate dream come true for me. I get to spend my days writing, creating things from nothing, building my own worlds and beings. It’s wonderful, and even better is that now I can share my worlds and characters with others.

The worst thing would be the inactivity. It’s not good on the body to sit for hours at a time, day after day. I try to get up every hour and move around, or break for lunch to go for a walk or work-out, but when the words are flowing or I’m approaching a deadline . . . Let’s just say there is a lot of stiffness when I get up!

Yes. And it’s insanely simple. Keep reading and writing. That’s the only way you learn, the only way to practice and hone your craft. Rejection is unavoidable. And creativity/art is subjective. Take what you can from the constructive rejections and criticisms to make your work better, and leave the mean, unhelpful stuff behind you. Believe in your work, but don’t be afraid to move on to the next manuscript! I know a lot of people who have focused on their first novel for years. Years. Once you’ve rewritten and polished and exhausted the agent and/or editor pool, write something new. It doesn’t mean you have to give up your first novel (heck, you just might sell it after you’ve become published with, say, your third novel), but keep writing new material. Let your creativity grow. Hone your craft with each new manuscript.

Writer’s block for me is a crutch I lean on when I don’t feel like pushing through a bad spot. My advice, if you’re stuck on something or blocked, would be to write a ‘come back to this later’ note within the manuscript and move on. You’re going to turn around and revise anyway, so it’s okay to push through a rough spot with horrible writing or leaving yourself a note to ‘Fix This!’ or ‘Figure This Out!’. The point is to get to the end. Like Nora Roberts says: “I can fix a bad page, but I can't fix a blank page.”

Oh, boy. Over thirty agent and editor rejections on that first book. I’ve amassed hundreds since I started writing over a decade ago. I have them all, somewhere in my mess of an office… Maybe one day I will actually sit down and count them, and then offer them up to the recycling gods. :)
Email ThisBlogThis!Share to TwitterShare to FacebookShare to Pinterest
Posted by Jessica Strider at 11:32