A few weeks ago my husband and I started playing Vintage Story, a video game that looks like Minecraft, and plays in a similar style, but which emphasizes the survival aspects. There's a limited lore implying a previous society collapsed (you find ruins of it all over with storage vessels containing some supplies and on rare occasions scrolls containing bits of story).

The main enemy are called drifters, which come in different varieties, and every now and then there are 'temporal storms' which causes your screen to darken, the visuals to waver, and drifters to teleport in around you. The game also has animals that will kill or damage you (namely wolves, but boars and rams can do some major damage too). Staying underground too long causes the gear at the bottom of the screen to turn left. Apparently bad things happen if the greenish colour disappears (I know you start fading in and out but we haven't let it go out completely yet).

Survival is the real test though. The game requires you to progress through the ages of man, starting at the stone age - knapping stone and flint tools to get meat and wood. You find seeds via storage vessels and wild crops. Then you can start farming. You originally harvest ores from the surface and have to find coal or create charcoal to smelt the ores (burning plain wood can't get hot enough) so you can mine. Making a windmill helps with the smelting, but takes time as you need a lot of flax fibers to make the cloth for the sails.

My husband deals with most of the mining, metal working and building. I tend to do more of the animal husbandry (we've got bees, pigs, and chickens), farming, and cooking.

The game makers are very friendly towards moders, which is great as we had to modify a few of the metrics. We've slowed the hunger rate (it starts unreasonably high) and added a keep inventory feature when you die (I die a lot so this would have earned a rage quit from me otherwise). We've also got a mod that allows for chiseled features, which is how my husband made the exquisite balcony on the house.

The game goes through the 4 seasons in a condensed year, which is cool as the colours of trees and plants change in autumn, getting more faded and white entering winter with the lakes freezing over, then to green, and finally a burst of variety for summer.

I took some screenshots so you can see our farm. This is the back of the house. We have 2 ponds. Below the windmill are my leather tanning and food preservation barrels. 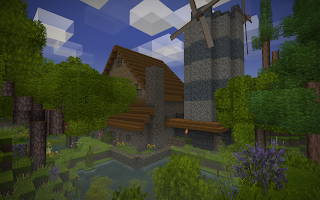 The front of the house. I built my farm onto a lake so I wouldn't have to worry as much about watering it. Off to the right, just out of view, is my apiary, also on the lake. Make sure to fence off your farm as the bunnies will eat your crops otherwise (and the 2 high fence areas are because we found out in winter the snow makes the ground high enough for bunnies to jump over a 1 high fence). 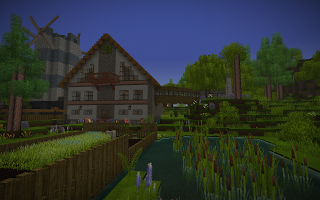 A close-up of us on the balcony! You don't get to fully customize your characters - there are only a few model options. 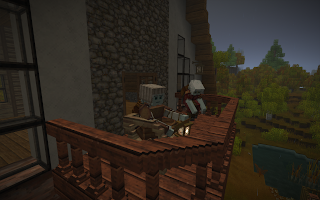 While trying to find salt for food preservation (found in deserts WAY to the south, like a real world hour's worth of walking to the south) we found jungle trees. I brought home some saplings, vines and flowers to create a little oasis near our farm. This shows the full play screen (the green gear, inventory, map and stats are from the basic game, the upper weather/time chart is an added mod, though the time can be accessed by hitting 'c').

My jungle without the extra info, and a wolf that tried (and failed) to eat me. 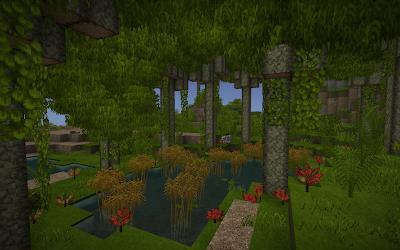 Like Minecraft it's an open world building game/adventure. It's a massive time sink (so keep that in mind) but also a lot of fun. The game costs 15 Euro and is available on PC, Linux (with some fiddling - check out their system requirements for info), and Mac (though apparently they won't be updating Mac OS after 2020).
Email ThisBlogThis!Share to TwitterShare to FacebookShare to Pinterest
Posted by Jessica Strider at 10:34