Book Review: The Rage of Dragons by Evan Winter 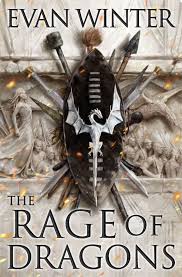 Two hundred cycles ago, Omehi refugees landed on the shores of Xidda and fought off the natives to claim a peninsula. They hold it through the force of their army and their Gifted. Tau Solarin is a High Common, nearing manhood and the test that will either let him train for his mandatory military service or force him to become a drudge. Neither future appeals to him, but a series of tragedies leaves him burning for revenge. Suddenly military training is the only future that matters.

The worldbuilding in this book is brilliant. There’s a lot of vocabulary to learn in the prologue and first chapter, but by chapter two I knew what everything meant. There is a glossary at the back of the book if you need it though. I’d heard online the book had African influences. After reading it I looked up some of the words and they are from the Xhosa language, though the meanings don’t all seem to translate to how they’re used in the book.

I loved the intricacies of how everything fit together: the military, the Chosen, the Gifted, the castes. There’s history on the peninsula as well as a mostly forgotten history of why they fled their homeland. A lot is left unsaid and I’m hoping some of that history will come up in the sequels. The world felt so real at times that I burned for the injustices felt by the Lessers and the often arbitrary justice the Noble castes could inflict on them.

Magic is sparingly used but I loved learning about it. I also liked that there are different beliefs in magic by the natives and invaders. There are limits to its use, which meant the stakes stayed high during battle. I also enjoyed learning about their underworld, the demons, etc.

The characters were all unique. Tau wasn’t the most likeable character. At times I felt sorry for him, at others I wanted to shake some sense into him. I loved some of the supporting cast members - especially the members in his core training group. I was impressed that the author introduced characters slowly, so you could really get to know them before adding more people to the group. It made it easy to remember who everyone was.

There’s a light romance. So light at the beginning of the novel that I expected the woman to disappear from the narrative entirely and was very happy that she not only came back in but had her own interests and goals (ie, wasn’t just the ‘love interest’) and played an important role at the end of the book.

Speaking of women, among the Omehi they are the rulers and Gifted (though have little import outside of those roles) while among the natives women are fully integrated into the military. It was cool to see some different social norms.

The book gets pretty brutal at times and very intense. Towards the end I needed a few breaks even though I wanted to know what would happen next. I’m not a huge fan of grimdark as I find the books can go too far in their attempts to be edgy and shocking, and so was happy there were no rape scenes in this (though there is mention that it does happen in the world).

If you’re looking for something different and like grimdark fantasy, give this a go.
Email ThisBlogThis!Share to TwitterShare to FacebookShare to Pinterest
Posted by Jessica Strider at 10:29