Great Courses Review: History of Spain: Land on a Crossroad 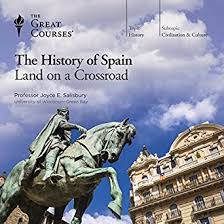 This is a Great Courses lecture series on Spain. It consists of 24 thirty minute lectures starting in the stone age and ending with the modern era. I borrowed the DVDs from my local library and binge watched them in a week.

This is an excellent course and gives you not only a grounding in Spain’s history but a lot of interesting background information as well. The lecture on Christianity explained some of the councils that codified the teachings of the Catholic church as well as some of the beliefs deemed heretical. The lecture on Visigoths drew upon that knowledge as their king followed the teachings of one of the heretical leaders. The lecture on Islam went over it’s origins and how the religion spread before examining the Muslim conquest of Spain. I was hoping for a similar deep dive into Judaism, but the lecture on Sephardic Jews was specific to their actions in Spain with only a little bit about how the destruction of the Temple in Roman times contributed to their diaspora. The lecture on Gitanos was fascinating, as I knew very little about them and their history (and the professor discussed terminology and explained that this particular group prefers the term to being called Roma).

There were a few instances where I’d have liked more information. While Maimonides was briefly mentioned, there was no time to explain why he’s considered such an important Jewish philosopher or what his teachings were. Similarly the Inquisition only got a few brief mentions.

I had originally planned to skip some of the lectures but watched them all as the story was so fascinating I didn’t want to miss anything. The professor had a great voice that was easy to listen to and showed her own excitement for the subject matter.

I do wish there were a pronunciation guide for Spanish, as it took me a few lectures to figure out some of the words (for example, Galicia was pronounced Galithia, which made me wonder if the provinces changed names at some point). While many names were shown on the screen, there were times when this did not happen (as with Galicia). More maps as graphics would have been helpful too.

On the whole if you want to learn the basics - and then some - of Spain’s history, this is an excellent resource.

As a tie in for fantasy worldbuilding, Spain has been conquered and reconquered so many times (Romans, Suevi/Vandals/Alani, Visigoths, Muslims, Christians) and its culture shows that. It’s fascinating seeing how each group ruled and what impact that had on the people, with their mixture of tolerance at some times and expulsions and persecutions at others. The history also shows how important geography is with regards to warfare. Some mountain peoples were never conquered, the Pyrenees was a natural barrier to the north (though it didn’t stop a few invading armies), while the close proximity to Africa allowed the Muslims to head north in their push for expansion. The country had a lot of trade - within the Mediterranean, and when the ‘new world’ was ‘discovered’ across the Atlantic as well.

Email ThisBlogThis!Share to TwitterShare to FacebookShare to Pinterest
Posted by Jessica Strider at 10:27