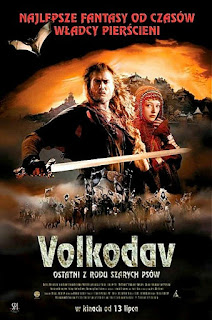 A former slave goes after the men who destroyed his village. He becomes a guard for a princess who’s been targeted by the man who killed his parents.

I heard about this film via Ross from the youtube channel Accursed Farms. He did a Ross’s Game Dungeon’s review of Requital, a game featuring Wolfhound. When Ross said you should watch the movie if you own a sword, well… who doesn’t?

If you’ve seen Conan the Barbarian, Red Sonja or a number of other sword and sorcery based films you’ll know what’s about to happen in this Russian film when men attack the young protagonist’s village. As soon as I saw his pregnant mother I knew this would be a revenge plot. And it is. It’s significantly better - and more interesting - than the 80s films I mentioned though, which is important as it’s over 2 hours long.

Wolfhound has a pet bat that helps him out a few times, which reminded me of The Beastmaster. I’m curious how they got it to act the way it did, and hope no bats were killed or maimed to get the footage they needed (it starts the film with a torn wing so it can’t fly).

As a character, Wolfhound has a lot of compassion for his fellow men, going out of his way at times to help others, which I enjoyed seeing. Often these heroes are only in it for themselves. In fact, there’s a whole undertone of ‘love will save the world’ that seems hokey considering the violence that rules this place. So I loved that his actions were repaid at the end.

The princess was well played. She’s kind of feisty, doesn’t want to be coddled, but also recognizes her duty to marry an enemy to forge peace. She’s practical in the face of her destiny. I thought the slow romance between her and Wolfhound was really well handled.

The sets and costumes were fantastic.

At the beginning I thought it strange that they didn’t explain how Wolfhound escaped from the mines, but it’s brought in as backstory at a point where it doesn’t slow the plot, which made me happy.

The special effects at the end are decent. They kept them to a minimum, which probably helped.

Like Ross, I can recommend this to anyone who has a sword hanging on their wall or next to their bed. ;)

Email ThisBlogThis!Share to TwitterShare to FacebookShare to Pinterest
Posted by Jessica Strider at 14:18