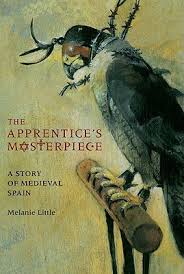 Fifteen year old Ramon Benveniste is a converso, a Christian with Jewish ancestors, living in Cordoba in 1485. As an apprentice in his father’s scribe business he knows things are tough as the Spanish inquisition puts more suspicion on those with their background, chasing away prospective clients in an already hostile environment. The family is given a Muslim slave, which makes them even more cautious about breaking rules of perception. The two boys don’t get along, and Ramon’s hasty decision one day changes both their lives.

While fiction, the book is solidly rooted in a factual portrayal of Spain at this time. The country shifted quickly from Muslim rule - where the three major religions were legally practiced, to Christian rule, where Jews were expelled, then converted, then persecuted, then expelled again, and Muslims were conquered, then converted/expelled/persecuted too.

The book is told in free form verse poetry. Each poem describes an event or scene and is from a few verses up to two pages long. It’s astonishing how much description and information is packed into so few words. Both the prologue and epilogue explain background information necessary for enjoying the story.

It’s subtitled a story of medieval Spain. There’s only a limited plot as the story focuses on the two boys and how they interact with each other and the world at large. The first and third sections are from Ramon’s point of view and cover short periods of time, while the second section is from Amir, the slave’s, point of view, and relates events that take place over several years.

The author pulls no punches about the brutality and reality of the history she’s relating. There’s a brief description of an auto da fe, a burning of heretics in the town square, told via a nightmare Ramon has after being forced to witness the execution.

Both characters are flawed but approach the world from their own unique experiences. They both have histories and make decisions they later regret. They also learn from past mistakes, and grow as individuals.

It’s an interesting style and a quick read. If you’re not familiar with medieval Spanish history than you’re in for quite an education.
Email ThisBlogThis!Share to TwitterShare to FacebookShare to Pinterest
Posted by Jessica Strider at 09:03