An article came out recently about the Bechdel test and how it’s unrealistic to expect good movies to conform to arbitrary guidelines. I won’t be commenting on the author’s complete misunderstanding of what the Bechdel test is for, instead I’ll be dealing with the conversations that have arisen from its final paragraph.

…women tend to write movies about relationships, and men tend to write movies about aliens and shootouts. Have a wander through the sci-fi and fantasy section of your local bookstore: How many of these books’ authors are female? Yet these are where the big movie ideas come from. If a woman wants the next Lord of the Rings–style franchise to pass the Bechdel Test, then a woman should come up with a story with as much earning potential as J. R. R. Tolkien’s.


As a former bookseller I can safely say that this author's not looked at the SFF section of a bookstore in a long time because there are a TON of women writing all kinds of science fiction and fantasy. He's also ignoring the fact that a woman (J. K. Rowling) has already written a fantasy series that's as big of a commercial success as The Lord of the Rings in both book and film.

But I’m not going to be talking about that either. Years ago I did a reading list for female science fiction authors (maybe I should update that list and do another one for fantasy authors). No, what I want to write about here is a response I’ve seen in reply to this article.

Barnes & Noble did a twitter post showing the spines of several books by women. A female commenter had an interesting response: 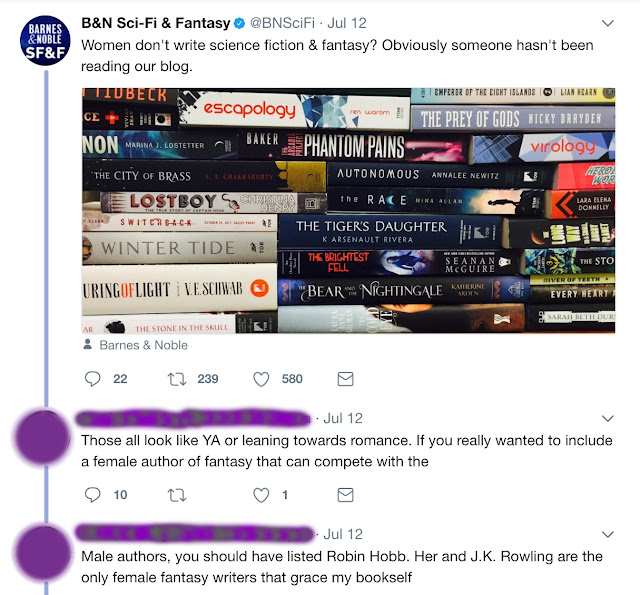 If you can't read it, she's complaining that the books all look like either young adult or romance - based on the spines (that is, based on the fact that the authors are women).

Silvia Moreno-Garcia, author of Signal to Noise, Certain Dark Things and the forthcoming The Beautiful Ones, took exception to the fact that her books are often called YA and then dismissed as not being worth reading. She tweeted the following (note, I edited the feed so it reads top to bottom and removed a few tweets due to length). 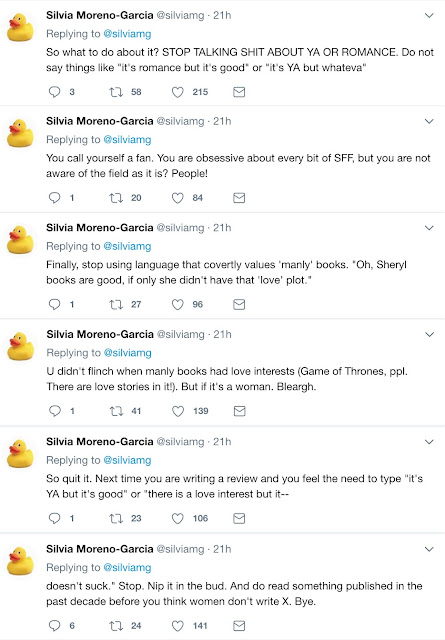 I understand Moreno-Garcia's point, that having a romance sub/plot or writing YA shouldn't make things inferior. My concern is that if we downplay romance then we feed into the belief that romance is shameful/wrong/unworthy. And I don't like that.

Instead, reviewers should start pointing out the romantic plots/subplots in books written by men. Make it clear that men also write touchy feely scenes. Point out when their romances feel realistic and natural. Mention when they’re written for the male gaze (women are only there as eye candy - eg: the sexy scientist who does yoga to maintain her flexibility - wink wink). If we bring attention to the fact that books by men also have romantic subplots, then it will become harder to dismiss women's writing because they do the same thing.

Writing good romance/sex scenes is HARD. Which is why I used to believe I hated romance in books.

Then I read some great SFF with well written romance and realized I actually enjoy it.

Here are some examples of fantasy books with excellent romantic sub-plots by women: Paladin of Souls by Lois McMaster Bujold, The Perilous Gard by Elizabeth Marie Pope. Summers at Castle Auburn by Sharon Shinn, Poison Study by Maria Snyder.

And some by men: Lamentation by Ken Scholes, The Bands of Mourning & Elantris by Brandon Sanderson, The Tomb by F. Paul Wilson, The Elfstones of Shannara by Terry Brooks, Tailchaser’s Song by Tad Williams.

Note, these aren’t all ‘category romance’, by which I mean, they don’t all end happily ever after the way category romance must. I’m not keen on books where the main plot is two people coming together (for several reasons, often they involve a lot of lying and they fall in love too fast to be believable, but mainly because I like plot driven rather than character driven novels), but I like a good relationship that’s built up over several books and feels organic and real. I especially like good relationships that include some fun banter (one of the best I’ve read for this is Dhampir and Thief of Lives by Barb and J. C. Hendee - though the later books lose the banter and my enjoyment of the series declined).

The Tomb may have been the first book by a man where the romance is what got me interested in continuing the story. The opening scenes show a very visceral longing Jack has for the girlfriend who recently left him. I wanted them to get back together so badly, even knowing why she left.

And speaking of Tokien, the romance between Faramir and Eowyn was one of my favourite parts of Return of the King. I loved that this fierce, determined, capable woman found a man who admired those aspects of her nature. I felt that he truly respected her as a person. Was it a major part of the story? No, but it tied up her segment of the story nicely.

Society has this strange idea than women love romance and relationships and men don’t. Aside from the fact that most men want to be in loving relationships, sex and love are fundamentals to human existence. Most novels mention them to some extent, regardless of who they're written by. No, romance doesn't have to be the focus, but to state that books written by women only deal with romance and books written by men don’t deal with it at all ignores reality. It also ignores a lot of male authors who - though they often try to deny it - write romance novels.

But since not everything is for every reader, here are some fantasy novels by women that have little to no romance in them at all: The Sleeping God by Violette Malan, Transformation by Carol Berg, The Tropic of Serpents by Marie Brennan, Resenting the Hero by Moira Moore (this series develops a romance as time goes on, but the first two books basically just have some great flirty banter), The Summoner by Gail Martin (a rather good romance develops in the second book).

And some books where the romance takes center stage: Lord of the Fading Lands by C. L. Wilson, Archangel by Sharon Shinn, Shades of Milk and Honey by Mary Robinette Kowal, Dragonflight by Anne McCaffrey, The Death House by Sarah Pinborough.
I'm only using fantasy novels as examples here (without bringing in urban fantasy), as that's what the original posts I'm responding to seemed to criticize. If I went into science fiction or other forms of fantasy, steampunk, etc. I could have even more examples. I also only used books that I remember clearly enough to know what level of romance they have (which, unfortunately, means these suggestions are very white).

So, where do you stand? Do you think romance is good in novels - as plots, subplots? Do you notice when men write good romance storylines? Do you wish romance would just stay out of books? What are your favourite romances in SFF books?

Email ThisBlogThis!Share to TwitterShare to FacebookShare to Pinterest
Posted by Jessica Strider at 12:06