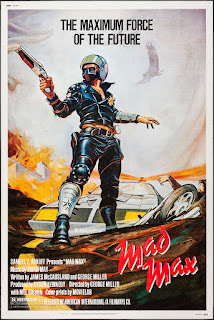 A few years into the future, Australia is slowly falling into anarchy. Max is a cop in a world where the law has little power. When a car chase leads to the death of an important gang member, the gang starts going after the police and eventually draw Max’s ire.

I never saw this growing up, though I did see the other films. I didn’t remember much of them though, so I had certain expectations that were shattered watching this. The first surprise of the film was that it wasn’t the post-apocalyptic setting of the later films. Society still exists in some recognizable ways, though it’s quickly crumbing as police become more brutal and courts have less power. It reminded me of Octavia Butler’s collapsing world in Parable of the Sower.

The second surprise was how long it took for Max to go on his rampage. The precipitating event wasn’t hard to guess, but it kept getting deferred, which I must say created more tension than I suspect was intended.

I loved the costumes, particularly the cops’ leather uniforms. The world-building was pretty good too. I liked that there were still institutions, but that their power was lessened. The bureaucracy shows up once when it comes to buying new police equipment and the costs involved. I was surprised at how willing Max’s wife was to go off on her own, which implied that things had deteriorated at a rate that meant people still felt relatively safe, despite the roving gangs. There are hints of the future wars over gasoline, and some good car chases.

While the slow pacing allowed the viewer to get to know the characters, there were several parts of the film that were kind of boring. I really expected the action to start sooner and the ‘hunt’ to take longer.

I was horrified by the treatment of the couple’s son. When he’s first shown, the toddler is sitting on the floor playing with Max’s gun. Seat belts weren’t really a concern when the film was made, but even so, in one scene he’s kind of tossed into the back trunk area of their station wagon. Then, after a traumatic experience, the wife (girlfriend?) take a good ten minutes to remember he exists and goes looking for him.

As a content warning, the film is rated R, with some nudity and a heavily implied rape scene.

I can understand why it’s not considered one of the better Mad Max films, but I’m glad I finally saw it.
Email ThisBlogThis!Share to TwitterShare to FacebookShare to Pinterest
Posted by Jessica Strider at 13:55