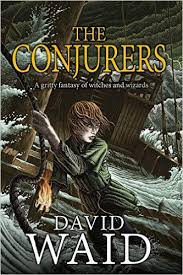 Every few hundred years a child is born with immeasurable power and the ability to use it without teaching or artifice.  A group of sorcerers discover that a boy in Ireland is the one they’ve been seeking.  They head to the island to capture him and steal his power for themselves.

There are two alternating storylines: Eamon and his family who are fleeing a bandit attack on their village only to run into wolves on the road, and Teresa, a Genoese nobleman’s daughter, whose brother has apprenticed with a well known alchemist and sorcerer in the city.  You learn a lot about these characters as well as the dangers they face (including the various sorcerers hunting them).

I really liked the maestro’s introduction in Genoa.  I loved how you learn about him from various sources before finally meeting the man.  It built tension and expectation.  All of the villains are suitably evil, but not in an artificial way.  Sairshee for example, wants to go further in her apprenticeship but is afraid of the horrific consequences of failing the spell she needs to cast in order to progress.  She’s portrayed as self-assured, but also recognizes that a lot of her security and power is due to the backing of the king.  The sorcerers are all ruthless, and delightfully - and terrifyingly - so.

The chapters are all short, helping to create a tense book whose pages turn quickly, rushing you towards the end.  The plot isn’t that complex, but it’s executed well, and leaves you guessing in a few places.  While it’s a standalone novel, it does have sequel potential.

While set in the real world, the book doesn’t touch on any historic events, though the black death and hanseatic league are mentioned.  Though the author doesn’t go into the magic in much detail, it seems to be based on circle magic found in actual grimoires (like the Key of Solomon).  And as the real world magic it’s portraying, there’s a mix of scientific exploration and blood.

There’s a section of the book that’s supposed to be the diary entries of a teenage boy, but are written in a narrative style that didn’t feel authentic as journal entries.  It’s unfortunate, because while the segments get a lot of detail across, the immediacy of journal entries could have added a bit more punch to those sections had the author focused less on descriptive detail and more on the events that happened (so, instead of describing the rooms and whatnot, the teen’s interest in the lodestone could have been played up more, and his hopes/fears for what’s happening).

I really enjoyed this book.  It was cool watching the different teens deal with their individual challenges, learning on the fly and doing their best to stay alive despite some pretty harsh obstacles.  The antagonists get pretty brutal at times, leading to a pulse pounding climax.
Email ThisBlogThis!Share to TwitterShare to FacebookShare to Pinterest
Posted by Jessica Strider at 09:46