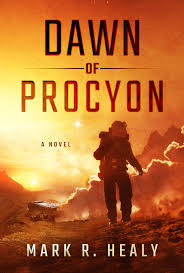 When Landry agrees to help a friend he has no idea that favour will leave him stranded on the surface of Proc-One, oxygen running out, no way to communicate with the base, and no hope of a rescue.  Then he realizes that one of the alien enemy Argoni is nearby, cannibalizing the wreck of his scout ship.

Cait’s the optech promoted to supervisor after Landry’s disappearance.  Her day’s not going well either.  Her boss is unreasonable, work is piling up, there’s an emergency repair that brings its own mystery, and she’s found a picture of Landry with a mystery woman.  She wants to enjoy her promotion but keeps thinking of Landry and wondering if he really is dead.

Landry’s a pretty resourceful character, surviving in harsh conditions for a surprising amount of time. Though lots of new problems arise, he faces each one and finds a solution. I really enjoyed his man vs nature chapters. The book spends a lot of time trying to get away from the initial impression of him as an anti-social workaholic. He’s portrayed as mostly friendless, with few redeeming qualities.

For the most part I liked Cait, though she’s somewhat cliched as well, a female mechanic trying to prove her worth to her father and male co-workers. She’s conflicted in that she’s happy to be promoted, but she doesn’t feel that abandoning Landry is fair, regardless of the circumstances for his disappearance. I did find it strange that the picture of Landry and his wife made her reconsider him as a person. I wouldn’t have thought his personal relationships would matter if she believed him a jerk for being so stand offish at work. There’s a chapter towards the end of the book where she makes some baseless assumptions about him that her own investigations don’t support. I talk more about this chapter in the spoiler section below.

There were some plot points that didn’t make much sense to me, starting with how Landry and Gus managed to steal a scout ship out of a military installation that requires passing through some sort of airlock. Surely there would be notification that the outer door has been opened, if there isn’t anything showing that a scout ship has been activated.

While I liked the pacing of most of the book, the ending progresses too quickly to feel realistic. It’s hard to believe Landry could come to comprehend anything at all from something so alien, but to do so as quickly as he does defied belief. I did enjoy learning more about the aliens and found these chapters very interesting, regardless of how contrived parts of it felt.

Having said that, the book’s ending was rather cool, with sequel potential.

This is a flawed book, but one that reads quickly and has some interesting ideas.

To learn more about the book and enter the publisher's giveaways, check out their website.

Cait states in this chapter that Landry was just at the wrong place at the wrong time with regards to his disappearance despite the fact that she actually saw him working on the scout ship before it took off, and therefore knew he was involved with the theft of the plane. She feels bad that she ratted him out, but why? He was clearly acting funny and ended up breaking the law. At this point she has no idea why he did it, just that he did. Similarly, she has the idea that someone would miss him despite meeting his listed next of kin, a woman who doesn’t know his name. And while there’s the photograph, Cait has no idea who the woman is or if she’s alive and/or still cares for Landry. I was also annoyed by her insistence that all lives matter while consistently mentioning Landry ‘and his pilot’. Gus was named, and apparently well liked by several people, even if Cait didn’t know him that well. But she doesn’t care about Gus any more than Landry’s supervisor cares about Landry.

The idea the the army is willing to let expensive equipment go missing with the belief that they can recover the costs from the thieves’ families is ludicrous. Army equipment is very expensive and families won’t have the kind of cash to pay back an expense like that. Especially when we know that Gus’s family has no money and Landry’s been giving all of his money to charity.


That chapter also mentioned that Cait would return to Earth and confront her father, convincing him that she’s capable of doing mechanic work. I don’t believe this confrontation would have any more effect than the previous times she’s confronted him. Talking to him won’t change his mind or it would have long before this point. Cait’s wasting her time trying for her father’s approval. Sometimes people don’t see eye to eye, and forcing the issue doesn’t solve the problem, it just prolongs it. If Cait’s happy with her optech job, than a better response would be to stop wishing for her father’s blessing and just get on with her life, enjoying the work she does. Because he’s never going to give her the validation she craves. And while making a positive decision in your life can remove negative thoughts and emotions for a short time, they’re patterns of behaviour and will return. To get rid of them completely she’d need to sit down and work through her issues, slowly replacing her negative thought patterns with positive one.
Email ThisBlogThis!Share to TwitterShare to FacebookShare to Pinterest
Posted by Jessica Strider at 09:59