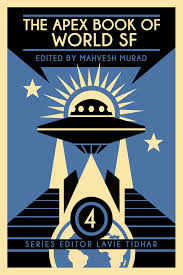 Cons: several confusing stories, no grouping together of similar stories

The 28 stories in this collection are written by authors from around the world, covering a number of SFF genres.  While most of the stories were good to excellent, I found a few to be rather confusing (a state which may have cleared up with further readings in some cases).  There’s no theme connecting the stories and they’re not gathered in any order, which is a bit disorienting, as you can read a story about spaceships followed by local mythology followed by post-apocalyptic followed by another spaceship story.  Gathering the SF, horror and fantasy stories together would have created a more cohesive feeling to the collection.  The anthology is a great jumping off point for finding authors as several contributors have novels out now or coming soon.

Stories are highly subjective, so while I’ve rated them, pay more attention to the mini synopses to see if the stories would appeal to you than to my ratings.

Not all of the stories appealed to me, but I thought the majority were quite good to excellent, making this a worthwhile collection if you’re looking for something different.

"The Vaporization Enthalpy of a Peculiar Pakistani Family" by Usman T Malik (Pakistan)
***1/2 In the aftermath of a tragedy, Tara Khan seeks knowledge, in order to understand herself and work for a better world. -
This is a story of how violence begets violence, and only knowledge and love can stop violence from consuming the world.

"Setting Up Home" by Sabrina Huang (Taiwan) (Translated by Jeremy Tiang)
***** A young man starts finding furnishings appearing both inside and outside his apartment, with no idea of his benefactor. -
Quite short but with a delightfully creepy ending.

"The Gift of Touch" by Chinelo Onwualu (Nigeria)
** The three passengers Bruno’s ship takes on for much needed money turn out to be very different from the farmers they claimed they were. -
I found the story interesting but the execution a bit heavy handed. There’s some expository conversations that felt forced (Marley’s love of guns, their smuggling past), and Horns’ past somehow only comes up now, during this crisis situation, rather than the interview when she was hired (I can understand her hiding part of her past and Bruno being ok with that, but it sounds like he never asked about anything she did before coming to work for him, and that’s just not believable).

"The Language of Knives” by Haralambi Markov (Bulgaria)
***** Together with your apprentice daughter, you carve up your recently deceased husband into cakes for the gods.
- A creepy premise that’s handled with care. It’s a touching story of dealing with loss, connecting with the past, and healing relationships.

"In Her Head, In Her Eyes" by Yukimi Ogawa (Japan)
***** Hase wears a heavy pot on her head, covering her eyes.  The household she is staying with to learn new patterns to bring to her home mistreats her, especially the wives of the older two sons. Only the youngest son treats her kindly.
- A fun, creepy story about being careful how you treat others.

"The Farm" by Elana Gomel (Israel)
**** A comrade rides to a farm looking for food he can confiscate for his commune.
- The eaters are quite terrifying and the slow build up to the ending really works.

"The Last Hours of The Final Days" by Bernardo Fernández (Mexico) (Translated by the author)
**** Aida and Wok slowly travel through post-apocalyptic cities by motorcycle, skateboard, foot and car while they await the end of the world.
- A surprisingly upbeat post-apocalyptic story.

"The Boy Who Cast No Shadow" by Thomas Olde Heuvelt (Netherlands) (Translated by Laura Vroomen)
***** The strange friendship between Look, a boy with no shadow, and Splinter, a boy made of glass.
- A brilliant but sad story of bullying and finding yourself.  Has some adult content.

"First, Bite Just a Finger" by Johann Thorsson (Iceland)
***** After taking a drug at a party and witnessing a guy do a strange party trick, Julia develops a terrible addiction.
- Really, really creepy.

"The Eleven Holy Numbers of the Mechanical Soul" by Natalia Theodoridou (Greece)
**** An old man, marooned on an oceanic planet, creates his own animals for company.
- An interesting story about survival and the nature of a soul.

"Djinns Live by the Sea" by Saad Z. Hossain (Bangaldesh)
**** A rich business man feigns sanity after 8 months of being haunted by a djinn.
- An interesting interpretation of djinn. Limited description.

"How My Father Became a God" by Dilman Dila (Uganda)
***** A girl, whose father has been banished from the family’s homestead for wasting money on failed inventions, needs him to succeed at something to help her avoid an arranged marriage.
- Interesting characters and a fascinating belief system.

"Black Tea" by Samuel Marolla (Italy) (Translated by Andrew Tanzi)
***** Four men are trapped in a nightmarish landscape of old hallways, empty rooms and stairs leading nowhere, being hunted by a creature masquerading as an old lady.
- You feel Nicola’s confusion as he tries to figure out where he is and what’s going on.  The horror begins with a note he finds in his pocket.

"Tiger Baby" by JY Yang (Singapore)
***1/2 Felicity is an office worker who knows she is meant to be more, more free, more… feline.
- Lyrical writing and a slowly unfolding story.

“Jinki & the Paradox” by Sathya Stone (Sri Lanka)
***1/2 Jinki’s family lives on an experimental colony set up by aliens.
- I really liked the trickster robot and puzzling out what Jinki is.

"Colour Me Grey" by Swabir Silayi (Kenya)
**** The protagonist lives in a world devoid of colour, protected by a wall erected by the Man and his descendants.
- A quick dystopian tale.

"Like A Coin Entrusted in Faith" by Shimon Adaf (Israel) (Translated by the author)
*** Correspondences between someone in Israel and a woman in the US who’s helping train an AI, tell the tale a midwife who helps birth a stillborn demon.
- I found this story fairly confusing. The format shifts between narrative, emails, and play dialogue, didn’t help.  While I thought it added to the story to have some phrases in Jewish Moroccan (and one in Aramaic), having the translations on the last page of the story rather than at the end of each short chapter (where they would have been easier to find/flip to) was annoying.  I did find the mythology mentioned really interesting and would have liked to learn more about it.

"Single Entry" by Celeste Rita Baker (Virgin Islands)
**** A special busker act at Carnival.
- Told in dialect, the story is both triumphant and a little sad.

"The Good Matter" by Nene Ormes (Sweden) (Translated by Lisa J Isaksson and Nene Ormes)
*** A antiques dealer with a special gift makes a purchase for something he’s been hunting for for years.
- This is a story set in the world of the author’s novels, and entices one to read more.

"Pepe" by Tang Fei (China) (Translated by John Chu)
*** Two mechanical children who can only speak to tell stories, visit an amusement park.
-There’s a lot of repetition and circular logic, which made the story less clear to me.

"Six Things We Found During The Autopsy" by Kuzhali Manickavel (India)
** Six inexplicable objects found on a woman’s body during her autopsy.
- I give this story 2 stars for the section on angels, which I found hilarious.  The rest of the story was too bizarre for my tastes.

"The Symphony of Ice and Dust" by Julie Novakova (Czech Republic)
**** An exploratory spaceship arrives at Sedna, a dwarf moon where thousands of years earlier, two other spaceships crashed.
- A story of multiple discoveries and how humans and science have evolved.

"The Lady of the Soler Colony" by Rocío Rincón Fernández (Spain) (Translated by James and Marian Womack)
**** The narrator’s family works at the Soler textile colony, passing by the metallic statue of the Lady every day.  Until the day the factory it fronts, collapses.
- An interesting story, though a few aspects left me confused.

"The Four Generations of Chang E" by Zen Cho (Malaysia)
***** Chang E wins the moon lottery, immigrating there.  But her descendants face different challenges because of her decision.
- An exploration of immigration and how it feels to be different.

"Pockets Full of Stones" by Vajra Chandrasekera (Sri Lanka)
***** A woman takes a job on a relay station between Earth and a colony ship to speak with her colonist grandfather.
- A story about family that has an alien twist.

"The Corpse" by Sese Yane (Kenya)
* A middle aged man passes away while riding the bus.
- I found this story boring and rather pointless.

"Sarama" by Deepak Unnikrishnan (The Emirates)
**** A man tells of his family’s forest demon ancestry as related to him by his grandmother.
- A fascinating story based on the Ramayana, of war and revenge. Adult content.

"A Cup of Salt Tears" by Isabel Yap (Philippines)
***** Makino goes to an onsen at night to help alleviate her sorrow over her dying husband and encounters a kappa, a water demon.


- I enjoy kappa mythology and this one takes an interesting turn.
Email ThisBlogThis!Share to TwitterShare to FacebookShare to Pinterest
Posted by Jessica Strider at 10:30