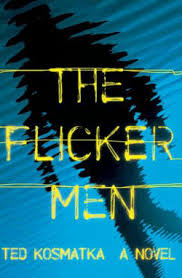 A quantum physicist shocks the world with a startling experiment, igniting a struggle between science and theology, free will and fate, and antagonizing forces not known to exist

Eric Argus is a washout. His prodigious early work clouded his reputation and strained his sanity. But an old friend gives him another chance, an opportunity to step back into the light.

With three months to produce new research, Eric replicates the paradoxical double-slit experiment to see for himself the mysterious dual nature of light and matter. A simple but unprecedented inference blooms into a staggering discovery about human consciousness and the structure of the universe.

His findings are celebrated and condemned in equal measure. But no one can predict where the truth will lead. And as Eric seeks to understand the unfolding revelations, he must evade shadowy pursuers who believe he knows entirely too much already.


I've had my eye on Kosmatka since his first book, The Games, came out a few years ago:

Silas Williams is the brilliant geneticist in charge of preparing the U.S. entry into the Olympic Gladiator competition, an internationally sanctioned bloodsport with only one rule: no human DNA is permitted in the design of the entrants. Silas lives and breathes genetics; his designs have led the United States to the gold in every previous event. But the other countries are catching up. Now, desperate for an edge in the upcoming Games, Silas’s boss engages an experimental supercomputer to design the genetic code for a gladiator that cannot be beaten.

The result is a highly specialized killing machine, its genome never before seen on earth. Not even Silas, with all his genius and experience, can understand the horror he had a hand in making. And no one, he fears, can anticipate the consequences of entrusting the act of creation to a computer’s cold logic.

Now Silas races to understand what the computer has wrought, aided by a beautiful xenobiologist, Vidonia João. Yet as the fast-growing gladiator demonstrates preternatural strength, speed, and—most disquietingly—intelligence, Silas and Vidonia find their scientific curiosity giving way to a most unexpected emotion: sheer terror.


His second book, Prophet of Bones, sounds pretty interesting too:

A high-concept thriller set in an alternate world where radiometric dating proved the earth is only five thousand years old, yet the fossil record is the same as our own. The key to unlocking a terrifying secret lies in the hands of one man.

Email ThisBlogThis!Share to TwitterShare to FacebookShare to Pinterest
Posted by Jessica Strider at 09:16