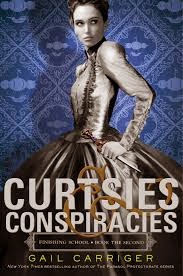 Mademoiselle Geraldine’s Finishing Academy for Young Ladies of Quality makes course for London after picking up some gentlemen from Bunson and Lacroix’s Boys’ Polytechnique.  They’re to see the results of an experiment in navigating the aetherosphere, something that would greatly reduce travel times.  But not everyone wants the experiment to succeed.

In many ways this is a light-hearted Harry Potter, if Harry went to a school for spies in a dirigible set in a steampunk Victorian England, cared more about fashion and Hermione was the protagonist.  This is the second book of Gail Carriger’s Finishing School series, and it maintains the same level of propriety crossed with rule breaking as the first.  The humour is dry, the sort you acknowledge with a snort rather than a guffaw, despite how unbecoming either action would be in polite society.

Sophronia and her gang of misfits are such fun characters, though due to exam results, she finds herself working alone more than she’d prefer, in this volume.  It was also nice to see her encounter real consequences for the kind of work she’s training to do, making her wonder if this really is what she wants.

The mystery involves several threads, some of which harken back to the events of the previous book.  There’s also the knowledge at the end that though things were resolved, there are still some questions to be answered.

If you haven’t read these books, you’re missing out.
Email ThisBlogThis!Share to TwitterShare to FacebookShare to Pinterest
Posted by Jessica Strider at 09:23