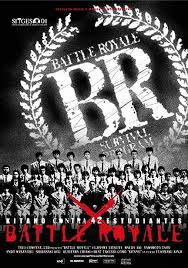 Cons: some unnecessary changes from the book, lots of graphically violent scenes

In a future dystopian Japan, the collapsed economy has led to a generation of kids with few prospects and no respect.  In order to make kids learn respect, the government has instituted the Battle Royale program, choosing one grade 9 class at random to duel to the death.

First of all, let me clarify that I'm not a fan of graphically violent movies or books (hence why that's in the 'con' category) but I have read the book and knew going into this that the movie would be graphically violent.  The film comes with a 16+ rating for a reason.  Having said that, if you're looking for a Hunger Games style film where most of the violence occurs off screen, this is not that film.

I was impressed by how much of the film matched the book's content.  There were a few changes I wondered about (like making 2 of the participants transfer students for the purpose of the game only rather than students from the class and the kids not knowing what the battle royale was in advance).  I loved that the man running the games had a personal grudge against this particular class.  Not only did it show that their selection for the game was rigged, it added to the terror because HE knew what was coming.  The one change I didn't really like was the reasoning for the games in the first place.  There's a chilling moment at the end of the novel where you finally learn why the government has instituted the program.  That moment's gone here, as the film has a different motive for the program, told via a quick narration at the start of the film.

Beyond those issues, the story - as far as I can remember - follows the novel pretty closely.  Shuya Nanahara (Tatsuya Fujiwara) tries to protect Noriko Nakagawa (Aki Maeda) while evading the other students and danger zones.  I was impressed by the acting chops of the kids.  They all did an amazing job.

All in all I was impressed by the film.  It's definitely not for everyone, but if you liked the book it's a  good adaptation.

Email ThisBlogThis!Share to TwitterShare to FacebookShare to Pinterest
Posted by Jessica Strider at 13:26

I watched this a while ago on Netflix, and what surprised me most was that the filming style looked like it had been filmed thirty years ago. Not sure if that was on purpose, or what.

i can usually handle violence better in books than in movies, and WOW was this violent! so maybe I'll try the book sometime instead.