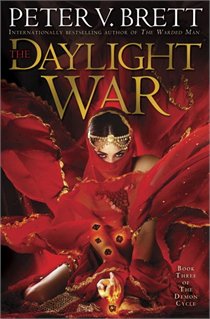 Pros: characters continue to grow, several people get much needed dressing downs, lots of romance (and sex), more background on the dama'ting

Cons: several characters in Everam's Bounty have similar names, which got confusing at times, cliffhanger ending

The Daylight War picks up directly where Brett's previous book, The Desert Spear, left off.  The third in the Demon Cycle, I can't give much of a synopsis without seriously spoiling the previous books.  So all I will say is that you learn more about the dama'ting, from Inevera's POV as she grows to womanhood within the organization and both Arlen and Leesha return to the Hollow, much changed by recent events.

The characters continue to grow, with - and I loved this - several of them growing backbones and telling the interfering people in their lives to butt out while they make life changing decisions.  It was great seeing Rojer come into his own and Gared getting some much deserved recognition for his contributions.  I'm still not sure how I felt about some of Leesha's decisions but I loved seeing Arlen's relationship.

One of the most interesting parts of the book was Inevera's upbringing and her reasoning behind certain decisions.  You also learn a lot about pillow dancing, as most of the characters in the book indulge in it, multiple times.

This only happened a few times, but there are several characters in Jardir's court at Everam's Bounty whose names start with 'A' and who all appear in the same scenes, specifically Ashia, Asome, Ashan and Asukaji.  There's a glossary of certain characters and terms at the back of the book (called the Krasian Dictionary), but I've found using those with ebooks (the form of my review copy) more hindrance than help.  Context usually helped with who was whom, and the author tried to remind the reader of everyone's connections, but there were a lot of similar names in this book.

The ending is shocking, with a sudden cliffhanger that will have your cursing the fact that the next book isn't out yet.

If you've liked Brett's previous books, this is a superb follow-up.  If you haven't read Peter Brett and like well written fantasy, I urge you to give him a try.

Email ThisBlogThis!Share to TwitterShare to FacebookShare to Pinterest
Posted by Jessica Strider at 11:24

Would love to read this series but the wait between novels is just too long. I'll wait for it to be completed someday.

@ Anonymous: Yeah, that's understandable. I was doing that for a while. Rereading books is time consuming and I can't remember details a year later (or more) anymore. But I have to admit, with some books, the anticipation of a new release is worth waiting between books for. Even if you then whip through the current one. At least the wait's not as long as with A Song of Ice and Fire.

How rapey is this one? That's my only complaint about the first two books.

All the scenes with any detail are consensual. It's mentioned that Abban's wives and daughters are raped by one of Jardir's men... which leads to a disturbing scene towards the end of the book. There's nothing like the scenes from the previous books that I can remember.

That's very good to hear. Thanks!