This was a popular reading list last year so I've redone it.  Some categories have several books, as those topics were popular and I want options for those of you who have read one of the books already and are looking for more.  For the most part, these are books that came out this year (there are a few exceptions).  This is a current display.  I picked books at random for the display, with the other books listed here as backups in the happy event that the first books sell down and need replacing.  Similarly, not all of the categories are on the endcap, I did a few extras just in case. 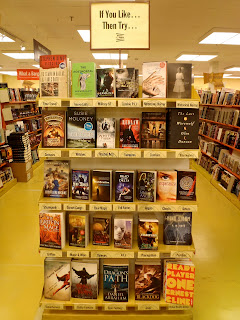 This is great, thanks!

I love your lists! Thanks. I scribbled some suggestions in my overflowing little book.

Huge thanks for placing SINS OF THE ANGELS in this display, Jessica -- SO exciting to see it there! :)